So I sprayed this on a tester card and decided to rub a little on myself to see how things go from there. How it smells on a tester card and on me is wildly different. Interesting, though not unheard of. Baby Phat Dare Me is a tropical blend of fruits and florals. Emphasis is on the coconut. Though on the card you really couldn’t tell just what it was trying to do. 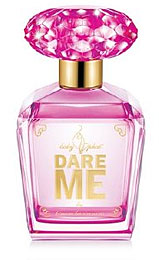 In Bottle: What the? All I get is tuberose. I swear this smells like a creamy tuberose which makes me think this is one of the more pleasant tuberose soliflores I’ve ever encountered. Upon reading the fragrance notes and looking at what everyone else says I am perplexed as I realize this was the result of a coconut note on astray. Hey, when you’re wrong, you’re wrong!

Applied: Actually, I refuse to believe I’m wrong as this smells like creamy tuberose. Big pink and smooth, with a bit of sweetness. That is what I get for the first few minutes and I’m sticking with my story. After things settle down a little and I regain my senses, I start to see where the coconut is coming from. It’s one of those sour coconut notes, not the creamy, lush kind that’s usually treated with vanilla and sugar to make it more gourmand. The coconut in this one is rather prevalent as it blends in with some tropic flowers and turns a bit green on me. As it settles down into the dry down stage, that sour coconut note is still lingering about until it dissolves into a slightly tart strange and a little bit musky.

Extra: I hold firm that I smell tuberose in this. I swear I’m not crazy. My nose might adore tuberose and smell it in everything though. So uh–as for this fragrance, it was supposed to be billed as a pleasant lush tropical, summery scent. They really outdid the tropical summery part of it and as much as I love coconut, that note in this fragrance was entirely too predominant and it wasn’t the sweet coconut variety either.

Design: Dare Me is bottled in a pink glass flacon with gold detailing and a plastic cap designed to look like a jewel. It looks a bit more like cauliflower to me though. I don’t find the design of the bottle aesthetically pleasing but I also think the look is a little over the top. However, I believe Dare Me is in line with the look of other Baby Phat bottles so if you are into that kind of look then you’ll like this.

I’m not feeling the coconut note in this. What I’ve noticed with coconut notes is that there’s a couple kinds. The sweet type and the sour type. I encounter the sour type more often. Sometimes it’s loaded with sugar or vanilla which helps masks the sour. Case in point: Dare Me and Victoria’s Secret Coconut Craze. Then there’s the sweet coconut that isn’t as sour and has a nice sweet, wateriness to it. That one I swear I smelled in Creed’s Virgin Island Water. But then, it could all be the same coconut note for all I know and it’s just coming up strange in some fragrances but not in others.