In Bottle: Spicy sweet floral with a citrus palette cleanser, bold for a men’s fragrance I gotta say. This is sharp, clean, sweet and strangely complex. A surprise to me immediately as it adds to its opening concoction a slightly boozy note intermixed with a dash of sugar sprinkled in.

Applied: After the citrus is done its job, the spice lingers around as is to be expected as the fragrance slowly introduces a fantastic miasma of cinnamon and clove with a few powdered flowers tossed in there for good measure. This scent is very dry, like a basket of cinnamon sticks at a spice market sitting near a bunch of burning incense on a hot summer day. It’s dry and warm and comforting with an interesting note of smoothness that comes up to mix with the florals and the spices that I want to say is sweet vanilla. Old Spice is a remarkably complex fragrance that goes through several stages on me but it’s mid-stage–that mix of sweetness, smooth vanilla, dry spices, and incensed florals is truly something else. Don’t turn your nose up at this or you’ll miss out on a very, very respectable scent. When Old Spice dries down, it takes a while to get there, but when it does it introduces a woodsy quality to the spicy floral sweet vanilla incense and warms things up even more with an amber and toasty tonka bean scent. Something this complex is mind-boggling how it could work together but it does! And it’s delightful.

Extra: Unlike a lot of people, I don’t have any early memories of Old Spice. I don’t know anyone aside from my fiance who may have once used Old Spice deodorant. And I kind of wished I did because this stuff is great.

Design: Old Spice’s bottle can be seen above. I don’t actually own a bottle of this stuff though with the affordable price tag, I really have no reason not to. The shape is reminiscent of a cola bottle but it works for this stuff and actually looks kind of nice. I can imagine that sitting on someone’s vanity. Wait, do men have vanities? I’ll just call them sink counter. Bottom line, the bottle works, it looks fine, it’s a good design for what it is and good for what you pay for.

Don’t knock it ’til you try it. Old Spice is a confident little classic number that’s been around since 1937. Yeah, the Old Spice really is old and I have to say, it’s aged rather well.

So Jicky, what do you want me to say about you? Well, I ask because everyone the world over has already said what they wanted. It just seems I’d only add yet another opinion to the already loaded mix of what makes Jicky tick. Ah well, let’s give it a stab anyway. I started off this blog reviewing Mitsouko of all things! 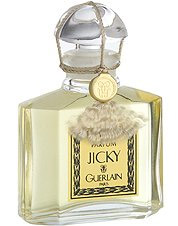 In Bottle: Spicy lavender, warmed up and dotted with a slight citrus topper in the opening. Jicky is immediately alarming and comforting at the same time.

Applied: Initial flare up of citrus, a big yellow splash in the opening to get you ready for the lavender that rolls in soon after. The lavender really shines with Jicky for me. It’s normally a comforting scent, this lavender, but the Jicky lavender gets a bit indolic at times thanks to what I can only assume is the civet used in this. It’s very heady and frankly speaking, she doesn’t smell “right” but that doesn’t stop her from smelling awesome. For those of you not in the know, “indolic” is a polite term for “smells like poo”. Breathe past that minute note of “off-ness” and you’ll be rewarded with a spicy leathery quality to it. There’s definitely animalic swayings in this fragrance. It’s not soft and tender lavender for sure and if you were to drop this into a soap people would be wondering what’s wrong with you while at the same time wondering how they could get in on it too. This is dirty stuff but it’s classy stuff, and it amuses me a great deal. She doesn’t try to fruit it up or pass it off as some sort of therapy and just for that alone, Jicky should be given a crown. It’s simply you and lavender, leather, spice, and hilarious indole. And you had better take it. Jicky uses that full lavender with an air of sophistication and a sense of daring all the way into the closer where the lavender fades a warmed dusty tonka greets you at the bottom with that ever present indole. Something about Jicky smells familiar but at the same time incredibly lush and hard to grasp. If Jicky could talk, I imagine she’d say, “What? You don’t like it? Then it’s obvious you don’t get it and I’ll thank you for getting out of my way”. Yeah, that’s Jicky. She doesn’t care if you don’t like her. She knows she’s good.

Extra: I love Jicky. I don’t love how she smells because I am a self-professed, shame-faced lover of clean and easy to wear. But I love what she stands for and appreciate what she is. She’s an era in perfume long gone but stubbornly and regally embodied in her bold presence that just refuses to go quietly. She’s one of the few Guerlains that I will probably never wear simply because she’s too much for me. But I can appreciate her all the same. Especially for being so “in your face” with all the fresh, clean, fruity stuff being pumped out today. I find it delicious to imagine a group of bottles, a hundred or so in number, of celebrity fragrances could be placed on the floor in a room. And there might be a bottle of Jicky sitting in the middle, waiting for some unsuspecting person to come by, pick her up and get slapped in the face with all that she is. Never change, Jicky. Never change.

Design: Those of you familiar with the Nahema design will recognize the image above. Though it should be noted that Jicky most definitely came first. Beautiful bottle, classical look, wonderful feel. Pictured above is the parfum concentration placed into an fantastic, elegant flacon. It’s Guerlain at its best.

You don’t really need me to rehash the romantic story of Jicky and her creation again, do you? Nah, I’ll just leave this post to say that if you were here and reading about Jicky, and were interested, there is a large online database of information readily available with a quick Google search about the conceptualization of Jicky, where you can get Jicky, and what–if anything at all–has happened to her in all these years since 1889 when she was first introduced. Or you can click here.