Villain is one of my holy grails. It’s a clean, herbal fragrance that doesn’t overdo the green or herbal. It’s clean and semi-masculine. Like a really well-behaved aftershave or a white starched shirt. 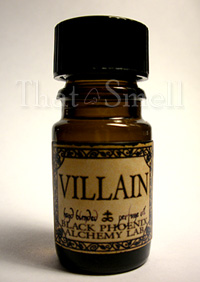 In Bottle: First thing I smell is a sharp clean white musk with a hint of lavender and lilac floating in the background.

Applied: The citrus comes up faster than the white musk on my skin. It sort of blasts itself into the beginning and settles down as it lets the lighter lavender note come up. I know lavender is polarizing. Too much of it and a fragrance stinks, but use just enough and it adds a bit of much-appreciated personality to the scent. Villain has enough lavender to detect, not enough to make eyes water. The lavender is also toned down by a more predominant lilac note that works incredibly well with the clean white musk. Villain’s lavender evolves into a stronger player as the fragrance ages on me, but it never gets to the point where it overpowers the rest of the scent. Put all this together and you get a clean, semi-aromatic fragrance that makes me think masculine, but that shouldn’t stop you from enjoying this if you’re a woman.

Extra: Villain is described by BPAL as a Victorian lavender fougere.

Design: Villain is designed like all other 5ml bottles from Black Phoenix Alchemy Lab. It’s set in amber glass with a plastic screwtop. The label on the bottle displays the fragrance’s name and fragrance house.

Just realized that it’s been a long time since I lumped a fragrance in the aromatic category. Anyway, Villain is one of the better lavenders I’ve smelled, but I tend toward sissy lavenders!