It’s funny to me how Creed priced its Green Irish Tweed (GIT) out of many people’s markets and drove them to a cheaper, albeit, very good alternative in Cool Water. These days when people think aromatic aquatic,they think Cool Water for the very simple reason that Cool Water was more affordable, more readily available, and it pretty much smells the same to most people’s noses anyway.

In Bottle: I’m one of those people who find Cool Water and Green Irish Tweed very similar so I’ll try to vary this up a little but do keep in mind these two fragrances go through the motions in relatively the same way. Cool Water opens with a green, citrus, aromatic backed by a couple of gentle wood notes lingering in the back. It’s herbs, aquatics, and woods basically.

Applied: Citrus is quick to fade with the green aquatics sticking it out while the woods and aromatics work their magic. Cool Water is a fresh, clean, easy to wear and easy to love fragrance that I have a hard time finding fault in. This was one of the earlier aromatic aquatics that lived in a time where the market was less convoluted. It grows on me, keeps me reminded of Green Iris Tweed. But there’s a bit of a difference between Cool Water and GIT, and that lies in the complexity difference between the two. There’s a certain flatness that Cool Water hits during the mid-stage, as if some component is missing from the fragrance as a whole. I want to say it’s missing a refined floral heart like GIT had while Cool Water focuses more on the aromatics and woods side. Whatever’s missing it, it needs to be looked for in order to notice, but I’m still left wondering just what that is. It seems to be the ‘spark’ that sets GIT aside from Cool Water for me. Cool Water chills out in the end stage with a cedar note. The cedar’s threatening me, of course, but it’s not as loud as some other cedars have been.

Extra: Now, I can sit here and ponder the intricacies of these two fragrances all day but being a child of the late 80s and early 90s, I smelled my fair share of both GIT and Cool Water. They’re still both very popular fragrances but they spawned a trend in men’s fragrances that still persists today. The aquatic fragrances family. A family so full of members that I have a hard time telling them all apart.

Design: I’m going to have sigh and say I’m not a fan of the bottle here. The colored glass angle has to be played right with perfume in that the shape of the bottle has to be able to stand whatever color you splash on it. Use too little color and people won’t notice. Use too much and the glass ends up looking like plastic. Unfortunately that’s the case with this bottle, it reminds me of a shampoo bottle.

There’s two main version of Cool Water (and a huge lot of flankers). One for men and one for women. This review was regarding the men’s version.

Black Phoenix Alchemy Lab’s Hemlock doesn’t smell how I’d assume Hemlock would smell like. But then, I didn’t expect this stuff to be green either. The real novelty here as most BPALs tend to be any color but green. 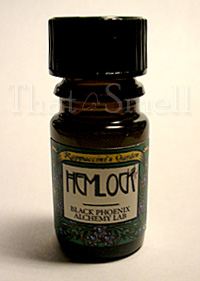 In Bottle: Green  and a bit bitter with a slight woodsy undernote and a citrus note up front. I’d dare to call this refreshing.

Applied: Yep, citrus with a light green scent a bit of sharpness to make this fresh and a bit dewy.There’s something quite aromatic about this too, mint and a little bit of peppermint and some green leaves picked fresh off a tree thrown in. The woodsiness in Hemlock is ever present making the scent smell a little bit like pine-scented air freshener. But it’s a good thing, believe it or not.

Extra: Hemlock is a plant type. One of hemlock’s most famous historical deeds was poisoning Socrates.

Design: Bottled in the same amber glass bottle with the plastic twist cap as other general catalog scents from Black Phoenix Alchemy Lab. You’ll notice Hemlock’s label is a tad different in design. This design is employed for BPAL’s Rappaccini’s Garden fragrances of which Hemlock is a part.

Just as a note that I am guessing at those notes up there. Now while I can’t really see myself wearing this as a fragrance, I do love it as a home scent. It’s got a classy air freshener smell to it, with my nose and I like those digs.