I know Calvin Klein’s been curiously overlooked in this blog for a while and here’s why–I don’t really like anything in their line. Even the hallmarks of Calvin Klein fragrances; Obsession and CK One. But I kept seeing Euphoria around and I’ve smelled it a few times before and decided to just get a few reviews out there because I know a lot of people love CK. 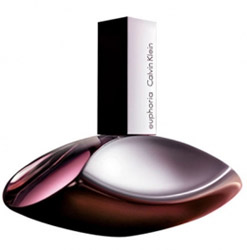 In Bottle: Sweet synthetic apple and berries smelling up top. The sugar isn’t mixing well with the pomegranate or the berries to my nose and it’s turning things into a bit of a cough syrup factory.

Applied: Syrupy sweet berries and a really obnoxious synthetic apple note on the opening that digs into the middle with the same syrupy sweet quality. The middle stage is marked with a series of banal florals, all of which are sweet and clean and try to clean up the sugary mess in the opening but all I get is sugar florals, sugar violets particular, trying to do what they can with a dewy green and clean note supporting them. Peaking up in the mid-stage is also a woodsiness that makes the mid-stage even more appealing. I think I would have liked the mid-stage of Euphoria a lot more if it was just the florals. Cut out the fruity sweetness in the opening and see how things go from there. But since we’re playing up the sweet, Euphoria’s end stage heads into a floral, warm and woodsy closer. Rather nice closing on this fragrance, actually.

Extra: There, I know a lot of people really like Euphoria but it did nothing for me. While the sweetness did not get to cloying levels, I felt the sugar in this fragrance was largely unnecessary.

Design: Euphoria’s bottle always manages to get knocked over every time I go hear it. The bottle itself is a purple glass shaped into a sort of abstract leave. The cap is a tall metallic rectangle that sticks up from the leaf. The design is interesting but the cap and how tall it is really annoys me.

Euphoria’s not bad when you consider its mid-stage elements and dry down. It’s a pretty good scent if you can ignore the sugar. I just found the sugar particularly irritating in this fragrance because it really didn’t need to be in this. Or maybe I’m just bitter because this didn’t work as well on me as I had hoped.