I was really wary of trying DKNY Be Delicious thanks to my less than warm reception to DKNY Delicious Night where I pretty much experienced it as a drowning episode in an ocean of sugar. But I tried Be Delicious anyway since a lot of people seem to love this. 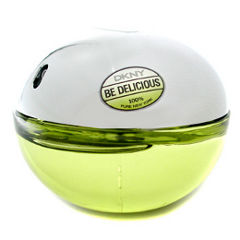 In Bottle: Synthetic apple. That’s just about all I smell, there’s some sharp little citrus notes in the opening but this stuff is mostly synthetic apple.

Applied: More synthetic apple bubbling around up top with a very sweet and sort of cloying personality. Beneath it are some citrus notes that try their best to make themselves known but the apple in Be Delicious is just way too strong for any of that “balance” and “blended” nonsense. The fragrance doesn’t really age well either, I get some floral hints as the wear goes on but everything is being obscured by the big fat apple that’s sitting in the foreground. It’s like I went to see a play and someone that’s wearing an obnoxious hat is seated right in front of me. That’s the apple in Be Delicious. It’s not a good hat. It’s not stylish. It’s just fake and gaudy and loud. The dry down sees a fade on the apple a bit, where I get some florals mixing it up a bit. I would have liked for the apple to go away a lot sooner but hey, I think we’ve established that Be Delicious isn’t my kind of ride and no last minute florals can help that.

Extra: So there’s apparently an entire line of Be Delicious flankers that I have yet to try but if I don’t even remotely like the original, I wonder how I’ll do with the rest of them. Probably not well if they’re anything like Delicious Night or Be Delicious.

Design: Shaped like an apple. I kind of like how the Be Delicious line is shaped though the construction leaves a lot to be desired. I thought the metallic cap on Be Delicious work in an aesthetic sense far better than the plastic cap on Delicious Night. So the original has that going for it.

I don’t know where the rest of those notes where. All I smelled was apple and then much later on some rose and lily.

Reviewed in This Post: DKNY Be Delicious, 2010, Eau de Parfum.