With a name like Fat Electrician, how can I not be curious? 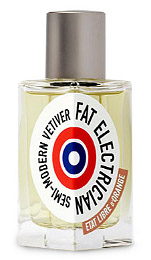 In Bottle: Dry, dry, and more dry. Strange how a fragrance can smell dry but that’s the definition of Fat Electrician in the bottle.

Applied: Smells a bit like baked earth. You know when you were little and made mud pies, then had to leave them outside when your mother called you in to wash up for dinner? Then you’d come back the next day and your mud pies were now pounds of dried earth? That’s what this smells like upon application. And–if you never made mud pies as a child–then the closest comparison I can make is drought-ridden badlands. Fat Electrician smells like parched earth and I can’t get over how weird that is. Weirder still is unlike some other bizarre scents from Etat Libre d’Orange, this one can be wearable. Especially as it ages on the skin and turns into this creamy smoky scent. Like someone burnt their breakfast toast as they were heating up their milk in the morning. Add that to the bizarre dry earth scent and I know it sounds so strange and discordant but Fat Electrician is wearable! I can see myself wearing this on a weird day. It’s wigging me out a little–though in a good way.

Design: Bottled in much the same way as their other fragrances. A well-made, nice-feeling glass bottle with a special label affixed to represent the scent. Fat Electrician’s symbol is an amusing crack at utility repair professionals. And that’s about as eloquently as I can put it using my meager language skills.

I just realized how funny it was to describe this scent as “earthy” while I look at its symbol. Just Google it, it’s a cute joke.