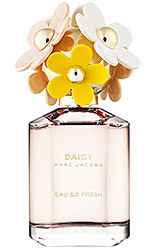 In Bottle: Litchi seems dominant with a fresh grassy quality. It’s otherwise a very nicely done fruity scent that reminds me of a fruit smoothie on a hot summer day.

Applied: I’m smelling litchi and fruit punch. I’m able to separate the litchi since it’s pretty strong to my nose but the rest of the fragrance is mushed together in this amalgamation of fruits. It’s sweet, a faint echo of Daisy in the brief grassy glimpses I get in the opening as the scent evolves into a fruity floral with the fruits still being the dominant players. As Daisy Eau So Fresh ages it leads away from the fruity opening a bit and evolves into more of a clean floral with a slight powdered quality to it. The dry down is noted with a clean musk and a hint of cedar. Overall, a more pleasant experience than Daisy. And I already liked Daisy to begin with.

Extra: Seems like ‘boggling at the advertising’ should be a regular feature on this blog. The ad for Daisy Eau So Fresh said that it was a whimsical interpretation of the original fragrance. I don’t know about anyone else, but if someone had told me to describe Daisy, I probably would have used the word ‘whimsical’ to begin with. How else do you describe a scent that’s supposed to be the smellification (now a word) of a daisy?

Design: Daisy Eau So Fresh is bottled in a similar shape and style as the original Daisy. Just think of the original bottle for Daisy, then stretch it out a little so it’s a bit taller, introduce some light dusty pinks, a little pop of yellow and you got the bottle for Daisy Eau So Fresh. I have to admit those rubbery flowers grow on me. Just don’t leave them out for too long because they collect dust like crazy.

Overall, I actually think Daisy Eau So Fresh did a good job being a flanker. It smells pleasant enough, easy enough, and if someone liked Daisy by Marc Jacobs they should probably give this a try to see if it jives with them too.