Oud has always been popular amongst perfumistas. It took me a while to get used to it myself. But how could I delay it? People love oud. Companies have entire lines of fragrances dedicated to oud.  So how does Royal Oud stack up to the competition? Eh. 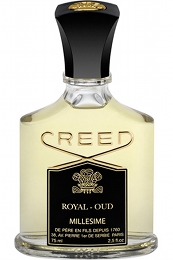 In Bottle: It’s oud all right. Dense and warm oud with a flowery bit of woodsiness and a major spice going on.

Applied: Okay, so here’s the problem with Royal Oud on me. It opens with a big spicy kick. Like the spices are a bit strong and overpowering at first and that makes it hard for my nose to adjust and get to the rest of the fragrance. As the spices settle down a bit, I get a warm, dense, slightly dirty oud and woodsy fragrance. The woods are a little distracting because I swear I smell a cedar note that’s threatening to take over and pull me away from the smooth richness of the oud fragrance. Royal Oud is a strange but rather boring creature. It’s strange in that it uses oud throughout its progression but the other notes in the fragrance seem to always be stronger and trying to overpower the oud. It’s boring because it smells like a spicy woodsy men’s fragrance with a little hint of dirtiness.

Extra: Oud has this dirty, dense, very resinous quality to my nose. But to describe oud is nearly impossible because there are so many ouds and so many different ways that oud can smell. It can be dirty, dense, deep, warm, sweet, and sticky. It also all depends on what type of oud you’re smelling and whether it’s a synthetic or a natural oud. It’s a talented ingredient that takes a good perfume to the next level if used right.

Design: The bottle itself is shaped and designed in a similar fashion to other Creed fragrances. Nice, heavy glass. Simple exterior with no unnecessary flourishes. The colors work well, the focus is on the fragrance and not the crazy gimmick bottle (here’s looking at you, Agonist. Even though I love Agonist bottles). It’s just a classic-looking Creed bottle that combines form and function very well.

I don’t know how I should feel about Royal Oud except to say that Amouage did it better. Get yourself an attar if you want something that focuses a bit more on oud. Get yourself Royal Oud if you’re not sure you like the stuff yet but you want a confident fragrance that features oud but won’t overwhelm you with it.