I don’t know why so many people think Avon perfumes aren’t any good. They, like any other place that has a line of perfume, have hits and misses. 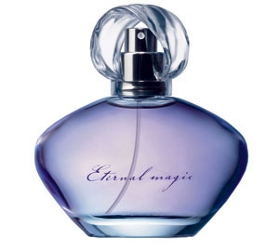 In Bottle: Powdery iris with a sweet rose note mixed with a dusty woodsy background.

Applied: Powdered  iris up first with a bit of green bitterness that blends in nicely with a sweet rose note. The two are blended in with some less obvious florals–or they turn into a less obvious floral. Either way, it’s a pleasant powder and floral fragrance that hits a woodsiness near the end of its midstage and takes on a more vanillic personality as it ages it on the skin. The vanilla comes up nicely between the florals, complimenting the fragrance rather than distracting from it. Nicely done, if somewhat dull.

Extra: Avon’s Eternal Magic was composed by Ellen Molner who also made such fragrances as Tocca Florence and Guess Seude.

Design: The bottle is a bit underwhelming. You know how some fragrance makers have a signature look? Avon’s got that for some of its bottles. If I see a rounded, squat bottle with a round cap I immediately think of Avon. Eternal Magic’s design itself isn’t bad, it’s not great either. I only think it looks rather plain, but it is otherwise functional.

So in the end, what about Eternal Magic and how it smells? It’s all right, I guess. Nothing to phone home about certainly, but it’s still better composed than a lot of other fragrances out there.