Montale released this one in 2010. So it’s a relatively new contender in the world of aouds and I’m happy to see this house embrace aoud with such open arms. 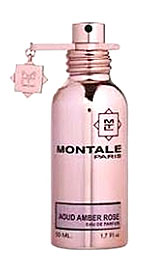 In Bottle: An incense woodsy fragrance with a core of roses.

Applied: Initially this smells like a sophisticated rose settled down by a bit of smoke and spice. The fragrance evolves into a woodsier floral composition adding a bit of ambery musk to my nose. It’s warm and dry, but quite nicely blended with the rose making itself the star. As Aoud Amber Rose continues to age it takes on more and more woodsy qualities with a tinge of animalism too.

Extra: I have to question Montale’s methodology. Once a year, we get a few new releases from them. And usually at least one of those releases is an aoud fragrance or something closely related to it. It’s at the point where I’ve sampled my share of Montale aoud fragrances and they all start to smell the same with a couple of components taken out or added in. When a house releases what is essentially the same composition with a couple of tweaks, is it really worth it (aside for collection’s sake) to get the next iteration year after year?

Design: I’ll admit, the shiny metal tubes are wearing thin on me. Other niche houses with their simple bottle designs are fairly understandable. They usually have some sort of distinctive aesthetic appeal. But Montale’s bottles started off beautiful with the brushed metal look. But Aoud Amber Rose? Well, it’s pink. It makes me want to tuck it away in a sock drawer for how inconspicuous it looks. Sorry, Montale, I’m not a fan of the color choice here.

There are novels that have been written about the beauty of aoud notes if used well in a fragrance. I’m on the fence about Montale’s many faces of aoud, but overall, I think they do a pretty good job. Aoud Amber Rose is a decent contender, but I have to concede to By Kilian’s Rose Oud as a more complex fragrance. In the end, this stuff isn’t bad, but it’s got some stiff competition.