While Thierry Mugler’s Angel didn’t hit it off with me, I was going to give Angel’s cousin, Innocent a try. I heard this stuff was lighter, easier to take, and lacked the patchouli that may have caused Angel to go foul on me. 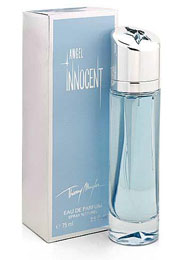 In Bottle: Fruits and almond with a very smooth and very sweet personality.

Applied: Initial flare of sweet citrus. It’s a little reminiscent of juice on the initial application to me. Like a tall glass of freshly squeezed lemonade with a bit of orange added for more citrus flavor. The fragrance heads into its middle stages with a lovely almond note that plays nice with the sweet berry midstage and–I might be crazy–what smells like apricot. As things go, there’s a bit of caramel-like fragrance that seems to want to join the fray here and there. The dry down is also pleasant with a warm amber and clean nutty aroma.

Extra:  Innocent was released in 1998 and has been compared to Angel numerous times. I definitely see the connection there. Except, unlike Angel, Innocent is much easier to take. It’s all the pillowy softness and sweetness with none of the bite. So if you wanted to like Angel but thought she came on too strong with her patchouli note, then give Innocent a sniff.

Design: Bottled very nicely in a tall cylindrical shape, Innocent is one of the less oddly shaped designs from Thierry Mugler’s fragrance line. It looks slick, it looks less clunky that many of the other designs while still maintaining a unique and captivating look.

I was one of those people who just couldn’t like Angel as a fragrance. And I’m probably able to slot myself into some category of people who didn’t like Angel but like this. Innocent is basically a milder, easier-going version of Angel with a couple of tweaks, but the same base personality.