I’m not one for hot weather. Don’t ask me why I moved to Florida of all places. So I’m usually hanging around inside and staying out of the heat during these hot summer months. But when I do go out, the high heat has me running to a few summer standbys and I came to realize that I reallylike coconut. 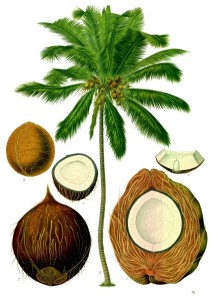 Virgin Island Water by Creed
I’m actually running low on the small bottle I have of this. And while many Creeds escape my understanding, Virgin Island Water remains one of the best interpretations of coconut I’ve smelled yet. I’m looking for other (preferably more affordable) alternatives. But until then, I’ll keep riding the sliver of fragrance I have left in the bottle of this perfume.

Vanilla Coconut by Susanne Lang
Vanilla and coconut has been done to death in the fragrance world. I love the combination so I’m happy to have the myriad of choices. And if I were to grab a cliche, it would be this one because it’s a very nicely composed fragrance with a tropical feel–perfect for these summer months!

Coconut Lime Verbena by Bath and Body Works
I like what I like and I happen to really like this. Painfully simple, very affordable, and comes in a huge bottle. Coconut Lime Verbena reminds me of clean, fresh leaves. I had a bottle of body wash in this fragrance and used that up in a couple of weeks. I can’t get enough of this stuff and it just screams summer to me.

Maybe it’s because my mother had cravings for coconut when she was carrying me. Or maybe it’s all the coconut I ate as a child. Or maybe it’s the sheer frustration of not being able to get my hands on a good coconut despite being so close to the tropics but I’ve really been craving these three particular fragrances lately.