Ambre Gris by Balmain was one of the first perfumes I ever reviewed for this blog. Back then I was still in my “Oh gosh! Fruits and flowers are so good!” phase. I’ve since grown a bit in terms of taste (or at least I like to think I did) and while I still love my flowers, my clean smells, and my fruits I’ve also warmed to Ambre Gris enough to be excited about La Mome rolling out of my sampler box for a try. 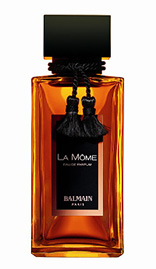 In Bottle: Roses, violets and an undercurrent of amber.

Applied: A flash of sweet raspberry that opens the fragrance under a fruity, sweet pretense. The rose is quick to fall in and I’m glad for that because I think I’ve had my fill of raspberry for a while. The rose has a lovely soft and classic affect mixing beautifully with an amber note that sweetens and warms the fragrance. I get violets the longer I wear this, giving the fragrance a bit of dusty appeal like I’m wearing a fine fragrance and just dusted myself down with some violet powder. This reminds me of fancy windows for some reason. Windows with intricate little patterns in the glass. Windows that lead to an exquisite sitting room. It’s deceptively simple because this is a much more complex scent than the seemingly easygoing violet, rose and amber mixture.

Extra: A little bit of research yielded an explanation for the naming convention of this fragrance. La Mome means “The Kid” which is a dedication to Edit Piaf.

Design: I love the design of this bottle. Balmain does very well with its packaging. The juice, the color of the juice, down to the materials and the style of the bottle, and the weight of the whole thing are meticulous. I love everything about it, up to and including the little tassels. 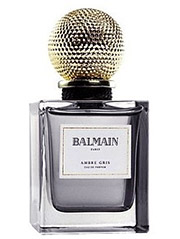