The Narcisse Blanc I have is a–of course–sampler from a parfum extrait bottle. I was wondering about the availability of this juice, given my very limited experience with straight up parfum extraits but was happy to note that Luckyscent carries it on their websitefor a rather reasonable price too.

In Bottle: Sweet orange floral with a strong dark jasmine presence and a bit of earthy iris, powder and woods.

Applied: Bright opening from Narcisse Blanc. I get an orange blossom scent that invades right away with a very strong regiment of flowers. The jasmine is quick to roll in with this soft touch of powder and earthiness. It reminds me of darker flowers than a bright jasmine. Like there’s a strong neroli presence that pulls the whole thing together.  The neroli makes it smell like what I imagine the dirt would be like when you stick your face right into the flowers and take a big whiff. Narcisse Blanc reminds me of daylight, warmth, dirt and the sun. It’s rather strong, possessing a sweet floral personality with a sophisticated bent and a touch of earthy powder like dust being kicked up by a dry wind. The fragrance as a whole is extremely complex and a unique joy to smell. I have to wonder how much of its complexity can be attributed to its parfum concentration, but this is a scent that’s been around long enough to stand the test of time. So while I feel like the parfum extrait might be helping it, Narcisse Blanc is probably just a good unique and complex classic. The scent dries down steadily into an earthier, smokier version of itself with the presence of sandalwood and a dusky musk note.

Extra: Narcisse Blanc is a sister perfume to Caron’s Narcisse Noir. Both are very old fragrances who have been around since the early 1900s. Both are still available today at Luckyscent.

Design: Caron’s bottles are always beautifully made and work wonderfully in terms of manual handling. I get a good grip, I can apply easily, and to top it all off the bottle looks gorgeous as a display piece–or it would if I had a bottle and already used up what was inside. No concerns when it comes to design and Caron.

It’s nice to get in a classic now and then. I found myself really missing the way these perfumes smell compared to contemporary fragrances.

Acaciosa is one of perfumery’s greatest floral perfumes. It was released in 1924 and remains one of the most beautiful, lush jasmine and rose fragrances ever. 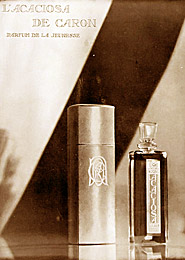 In Bottle: A big floral bouquet of jasmine and rose with a slight hint of amber.

Applied: Jasmine and rose are the stars here and the major players throughout the entire fragrance. The instant Acaciosa is applied you will smell these two principle notes that have endured the test of time and have continued to appear together in some of the fragrance world’s most popular classics and contemporary fragrances. Acaciosa does jasmine and rose proud because it plays up their authentic beauty and blends them together so well that a sniff of Acaciosa tells you immediately that you’re smelling a fantastic floral. There’s no real debate to be had, you’re smelling history and you’re smelling a floral perfume as it should be. Right from the start, into the middle, and down into the base you get jasmine and rose mingling together in a gorgeous medley. There’s a faint hint of sweetness and a jolt of tart pineapple that serves to deepen this fragrance with its mostly heady floral bouquet. The base intensifies with a warm amber quality. This amber note is present during the opening and midstages but doesn’t become too strong until you reach the base.

Extra: Caron has a fountain version of Acaciosa available for those of you who wish to experience the full on artistry of this fragrance. One of these days I’d like to see a Caron fragrance fountain for myself.

Design: The bottle pictured above is from a vintage ad dating back to the 1930s when Acaciosa was a bit easier to find. It’s a shame this fragrance is so exclusive now. I have yet to hold or even see more than a small sample of this stuff but everything Caron made back in its hey day looks beautiful.

I have no idea and no way to tell how old the decant of Acaciosa I have is. We can only take a blind stab in the dark that it is a vintage that could have been from the 40s, but even then we can’t be quite sure. So take the dating of my sampler with a grain of salt since I can’t guarantee its accuracy.

I think I’m still whirling from that miasma of hazelnut from smelling Chocolovers, but I’ve this drawer full of vintage perfume samples and by George, I am going to have a marathon. Starting with this beauty right here, Tabac Blond by Caron. Long dead and been replaced by a pale imitation toting itself as Tabac Blond. I believe my sample is from the 50s, though I cannot be sure when this was made. All I know is that it bears very little resemblance to the present day Tabac Blond EDT and EDP, though people have also noted those two forms are no good and the parfum that I have is the way to rock it.

In Bottle: Not at all what I expected. Might be cause I’m used to perfume from the more modern times. Tabac Blond opens with a roaring leathery, viscous petrol note that threatens to punch you right in the nose just because you aren’t manly enough for its opening. And it’ll do it.

Applied: This smells like a garage. A place with motor oil, diesel, and bitter smoke. The leather note is beautiful, full and rich. The opening smokey oil scent takes a bit to give way to the equally smokey and rich, deep spices. Cloves are there in large numbers blended with that rich leathery scent that gives this fragrance a sophisticated feel. The carnation lends further to the spiciness already noted in Tabac Blond but also gives it a very, very slight clean feel to the fragrance. The spices and leather revolve into the base as well as Tabac Blond kicks up with a touch of florals, keeps the spice, and takes on an even warmer quality with a golden amber note at the bottom to finish things off.

Extra: No modern men’s fragrance smells like this as far as my knowledge goes and it is a shame because what’s billed as masculine today pales by comparison to Tabac Blond. And the best part? Tabac Blond could be worn by both men and women back in the day and was primarily marketed towards women. But because of how sweet and fruity we’ve gotten with women’s perfume in recent years, Tabac Blond would probably be labelled as, “Hyper-masculine”.

Design: Tabac Blond has been redesigned over the years and what bottle it now comes in is a mystery to me. Perhaps one of you can help me out in this regard. I recognize its old classic bottles, rectangles with beautiful accents. Simple but so dramatic and classic. If I were to purchase Tabac Blond on of these days, it’d be in a classic vintage bottle with–hopefully–well-preserved vintage juice inside. Pictured above is what I assume is a recent bottle design. It sort of lacks the elegance of the classic bottles but it is not a bad design. Actually, the more I look at it, the more in reminds me of Britney Spears’ Fantasy series thanks to those little bumps on the glass. Never mind.

If men want to smell really manly instead of woodsy and aquaish, Tabac Blond will do it. But good luck finding the vintage. The recent version is a pale imitation. So pale that I would be tempted to say it’s a completely different scent. It’s like they took the classic then neutered and left it in a bath for weeks.

I was wearing Fleurs de Rocaille around today to see how she’d do with a little bit of aging and stood a bit too close to a rather unimpressed young woman who upon catching a whiff of it proclaimed, “Someone’s wearing grandma’s perfume!” Ah, complete strangers making loud comments about my perfume. What a life.

In Bottle: To be fair to the aforementioned young lady, Fleurs de Rocaille is old and she smells like she came from a different era for sure. She’s a classic from 1934 when she was composed by Ernest Daltroff.

Applied: Fleurs de Rocaille’s opener is a bit sweet for me thanks to the violet she also has a bit of headiness but she does smooth out.  She opens with a fantastic flair of aldehydes and florals, a very pretty rose note up top that stays throughout the scent. Then she settles down a bit. Not quite to the stage of modern perfumes with their clean, floral mid-stages or inoffensive fruity blasts. She’s a powdery, soapy, floral thanks to those famous aldehydes that everyone with a modern nose seems to equate to either grandmas or cat pee. I hope their grandmothers are cheap with their presents this year. Honestly, people, lay off the old ladies, would you? There’s a lot of florals to be had in this scent with the jasmine, rose, and narcissus playing the loudest among a group of green, softer flowers. Fleurs de Rocaille blends the florals so well with a very classic aldehyde rose build that settles into the base and end stage along with a very woody and warm amber scent.

Design: Fleurs de Rocaille’s bottle reminds me a bit of Annick Goutal’s ribbed bottles. The shape is similar and the cap’s ribbed shape is very reminiscent of Annick Goutal. I like it though. It’s a nice feminine shape with a pleasant weightiness and a good, simple, clean design. Nothing fancy about this!

This little tester vial of Fleurs de Rocaille has actually been bouncing around my “to test” pile for a while. For some reason, I had convinced myself that I had Fleur de Rocaille instead of the older version.