Florabotanica is a new Balenciaga release from 2012. After their Balenciaga Paris release, I had to give this one a try. If for nothing else than its beautiful bottle design. 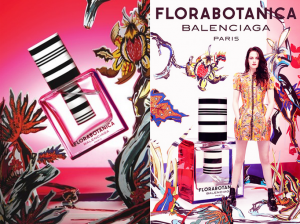 In Bottle: A nice rose, tame and green and fresh. Not fake and overly sweet.

Applied: Balenciaga’s fragrances tend to excel at being understated and Florabotanica seems to be heading in that same direction. It’s sold as a fragrance for a younger audience, but doesn’t patronize them by loading itself up with fruits and a cheap-smelling rose. The rose in Florabotanica is well-mannered, having a fresh green spicy kick to keep it on the ground. The dry down is a nice grassy amber with a prominent rose. I get an impression of Juliette Has a Gun’s Lady Vengeance with a little less concentrated prettiness and more girlish charm.

Extra: Florabotanica was released in 2012 with Kristen Stewart as the campaign figurehead.

Design: Love the bottle design. Bold, modern and fashionable. I was somewhat questionable about them using Kristen Stewart as the face of the fragrance, but I love everything from the styling to the photography to the campaign itself. It’s stern and not at all silly.

The thing Florabotanica reminds me of is preppy clothing. It makes me think I’m shopping in some teenage store where all the teenagers play water polo, have stables of horses, and have parties on their yachts. I don’t know why it makes me think of this but the fresh, screaming clean rose just sort of fits the imagery. It’s not Lady Vengeance as I think Juliette Has a Gun’s rose fume was a little more likeable but Florabotanica is a good, pleasant addition all the same.

I hate it when I reach for a sampler, smell something, decide that I love it then find out that it was discontinued or is now incredibly rare. In Cialenga’s case, it was discontinued and now only exists on eBay. Thankfully, the prices aren’t sky high. Unfortunately, supplies will run out sooner or later. It’s such a shame for a fragrance so classically beautiful.

In Bottle: Smells rather familiar, like an aldehydes based fragrance but softer. I get the crisp green citrus and the floral notes, most notably ylang-ylang, rose, and lily.

Applied: Crispy green opening with some aldehydes rolling in. The aldehyde element isn’t too strong in Cialenga. It adds rather than dominates as it tends to do. The fragrance ages very gracefully into a midstage marked with a prominent rose, ylang-ylang, and lily bouquet that has elements of the powdery, soapy aldehyde composition. The clove mixes in this general area too giving it a bit of spiciness to work with. The fragrance then starts to age into its dry down with a bit of woodsy earthiness coming through and a marked green richness with a hint of powder and spice.

Extra: Cialenga, if you get a whiff of this stuff is a really well-balanced and very well composed fragrance that harkened from a time when classical perfumery was still somewhat celebrated. It was released in 1973 by perfumer, Jacques Jantzen.

Design: Cialenga’s design reminds me of the 70s but also seems to borrow some design elements from the 1920s or 30s. Something about it is is very Art Deco. Maybe it’s the straight lines. Whatever it is, the design itself is a bit aged but then again, the fragrance is discontinued. It’s not something I’d like aesthetically but it is lovely in a very vintage way.

I can only presume this stuff was taken off the market for its oak moss content. A real shame because Cialenga is a very approachable aldehyde. I can see it as the aldehyde primer for someone uncertain or afraid of the note.

Perhaps you’ve heard of Balenciaga before, no, not their handbags that seem to be gaining in popularity these days. I’m talking about Le Dix, the street, the clothes, and the perfume. Mostly the perfume though. It’s a classic aldehyde, beautiful, but that’s not who we’re talking about today. Let’s jam it up with Balenciaga Paris. 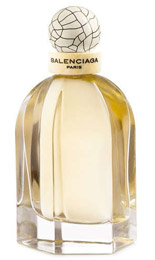 In Bottle: Paris opens with a sheer, undetected level of sophistication and elegance. It’s violets and sun dew floating in the air.

Applied: Paris is incredibly light, it clings close to the skin and stays close for hours upon hours but what it won’ do is shout. This is a scent that’s meant to stay personal. I smell violets first of all, sweet little powdery violets drenched in dew. The mid-stage sees more violets, the dewy quality evaporating leaving me with a little bit of spice a nice hint of woods and a quiet little whisper of patchouli on the dry down. You shouldn’t expect projection with this fragrance. Paris’ angle is subtle and sleek. Get them while they’re close and keep them there with that violet softness.

Extra: Balenciaga is a fashion house with its headquarters in Paris, France. It was established in 1914. Other popular fragrances by house Balenciaga include Cristobal, Rumba and Le Dix.

Design: I love the bottle. I love its cap, love its shape, love the heft of it. It’s got nice weight, nice aesthetics and even though it’s a bit busier than the usual things I like, the business is well-designed, well-proportioned and very balanced.

Yes, believe it or not, this is a modern chypre. It’s got the right build though.