Call me crazy, but I don’t like Obsession for Women. I like the men’s version a bit better but both of them fell off my radar and into ‘Eh, don’t like it and can’t get myself to’ territory. Much like how Poison by Dior ended up there. 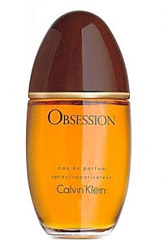 In Bottle: Warm and spicy, very reminiscent of Opium but not as smooth or as smoky. I smell the animalic in this up front too.

Applied: Obsession opens with a slight spray of green citrus which is quickly joined by the civet note. Civet is used well in most perfumes, often as a touch of sensuality and Obsession is no exception. Anyway, after the light citrus and civet open up, the fragrance digs a bit into a fruity jasmine and rose blend dolled up with a lot of spiciness. There must be cloves or cinnamon in there somewhere. Obsession’s projection, by the way, is very good as is its longevity. You’ll be waiting a rather long time for it to dry down but the fragrance dries so naturally into a deeper woodsy floral amping up the civet a little and mingling those spices with a very warm amber quality to it and a slight smokiness that eeks itself into the scene at the very end.

Extra: Obsession was released in 1985 during the crazy trend with oriental perfumes.

Design: Obsession’s bottled in a oval glass with a golden liquid inside. The cap is a rich brown shade. The packing looks nice enough and a bottle of Obsession is definitely easy to ID. It’s clean, it’s simple, it’s pretty good.

Obsession is a well done perfume. I just want to get that out there, I just don’t like it because I believe it’s very similar to Opium and Opium did this concept better which makes Obsession seem rather unnecessary to me. But then, Opium is stronger, so if you liked it but thought it came on way too much, try out Obsession and see if this will work better for you.

Reviewed in This Post: Obsession for Women, 2004, Eau de Parfum.