Always on the look out for that next great vanilla to replace Spiritueuse Double Vanille. I don’t know why I keep wanting to upgrade. You would think once I find a fragrance that I love, I’d just stick with it? Maybe it’s the fear of SDV one day being discontinued. Or maybe it’s just the thrill of trying to find something just a little bit better.

In Bottle: Spicy vanilla with a woody personality. Quite nice and quite interesting!

Applied: Citrus opener with the lime and a slightly sweet cedrat note. Maybe I’m inventing the sweetness but it smells a bit like lime and lemon with a hint of sugar. The vanilla evolves with this glorious green spiciness and woodsiness in the mid-stage. The woodsiness actually adds to the fragrance in the very subtle way that it’s used. Kind of like adding personality to the vanilla rather than just mixing with it. The florals are very light with the jasmine making the most pronounced appearance giving the fragrance a feminine touch and taking away from the level of gourmand this would reach if the woods and florals hadn’t been around to soothe it a little. This smells like warm vanilla pods and being in the woods with a cup of lemonade. It’s very easy to like and easy to wear and it’s a hint more special than your standard fare sweet and synthetic vanilla scent. The vanilla is, indeed, a little bit more interesting than your usual and it’s quite nice with this smooth and spicy personality that mixes really well with the woods. Very nice, indeed.

Extra: I almost forgot how nice a niche line could make a vanilla fragrance. I got a little caught up in the humdrum mainstream market for a while, smelling mostly synthetic vanillas and interpretations made for clearly younger audiences than me. It’s nice to come back to niche now and then and smell something this good.

Design: The bottle’s shape itself is rather simple, a little reminiscent of more common things like shampoo. But the design on the glass is what really makes it. Lovely colors, nice typography, great use of space. I really like how it takes a simple shaped bottle and turns it into something more luxurious and artsy. Nicely done!

I’m not entirely sure what a cologne absolu is or what its equivalent on the concentrations scale is. If I had to venture a bold guess, I’d presume Eau de Toilette, as the fragrance is a bit light but then you can’t really tell with these things anyway. Bah, regardless Vanille Insensee is a pleasant, unique vanilla scent and for $170, you can get a lot of this stuff (200ml). 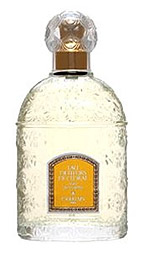