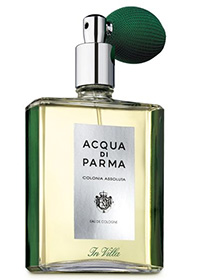 Up today is another decant from Steve at The Scented Hound (thank you). I really have no method to my madness, so I decided upon Colonia Assoluta In Villa because it was the closest one.

In Bottle: Green citrus, I get a lot of lime and bergamot, with a big dose of woodsy notes.

Applied: Lime and bergamot on opening, reminds me of greenness and it only gets more green when the cypress quickly rolls in. When I looked up the notes for this Acqua di Parma wants to tell me they used cedar. Now, I’m not a great nose when it comes to well-behaved cedar because it’s always going funky on my skin. If this is cedar, then it’s behaving really well. The citrus is quick to dissolve, leaving cedar holding the bag until a clean waft of florals rolls in during the midstage with the very barest touch of spice. The scent gets decidedly less floral near the end where the green cedar continues to carry it forward with a touch of warmth from a very faint amber note. The fragrance reminds me a lot of an adorable little cottage I saw once. It was–funny enough–in the middle of a city, but the owner had enough land that despite metropolitan life going on around him, he managed to have a beautifully done wooded area surrounding his property. It looked like a page out of a storybook and In Villa reminds me of that.

Extra: Colonia Assoluta In Villa was released in 2009 by Acqua di Parma.

Design: I actually really like the bottle for In Villa, it’s elegant and simple. Modern with a little bit of classic flair so that it doesn’t look outdated. I think what sells this bottle for me (in terms of aesthetics) is that it has a balloon pump, which gives it a classic charm. Though as Steve noted, the balloon pump adds an element of beauty to the bottle, but it’s not great when you go to use it. From my experience with balloon pumps, I can eagerly agree.

I was really happy with how well the cedar in this worked on me, but aside from the surprising mild cedar, there’s not a whole lot going on with In Villa. It’s pretty enough, but it’s not my kind of thing. But if it is your kind of thing, you can buy a whopping 200ml of this stuff. That’s a lot of In Villa!