Apparently Playboy didn’t stop at the last trilogy of “Play It” fragrances that included in Play It Sexy, Play It Lovely and Play It Spicy. Play It Rock is a new fragrance that’s built on the same concept as the previously mentioned three scents. 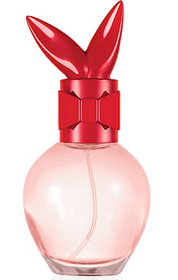 In Bottle: Citrus and fruit. Lots of fruitiness in this actually with a little bit of vanilla.

Applied: Citrus up top, rather loud and harsh at first and makes me think that’s where the rock is coming from. The sharpness goes away rather quickly though and I’m introduced to a fruity mid-stage that makes me think of apples and berries mixed together in a bizarro cupcake. The fruitiness is tempered a bit by a pretty benign layer of generic, but soft and yielding florals. As the fragrance ages the vanilla note arrives making Play It Rock smell more and more like a fruity cupcake. Nothing wrong with that. The fragrance is rather soft at this stage and doesn’t smash you in the face with its sweetness. It’s actually pretty decent when you get to the dry down. It’s not unique, but it’s perfectly wearable after the opening.

Extra: Play It Rock was released in 2011. I’m not sure where Playboy is going to take this line. A part of me wonders if they’re going to be releasing two more Play It fragrances or if they’re just going to leave it at Play It Rock. I just hope they get a bit more creative in the future.

Play It Rock doesn’t do what it’s meant to do badly. It’s not exciting, but it’s a good competent fragrance for a younger audience or for someone who wants a nice sweet fruity scent that isn’t too strong. Granted, if you wanted something light and sweet you could get the body spray version of this stuff.