So here we go, Pure DKNY was slated to be one of the finalists for the 2011 FiFi Awards. Now, I don’t put too much weight into the FiFi awards as a means to determine “best” and “worst” as fragrance preferences differ a lot from person to person. But the FiFi’s certainly are a spectacle. But when Pure DKNY popped up in the ranks I set the spectacle aside for a bit and had to wonder why. Why Pure DKNY? There were other Luxe fragrances released this year that did things so much better. 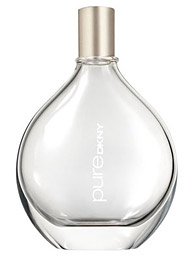 In Bottle: Waifish is probably the best word I can come up for the in bottle experience. This is a light airy vanilla floral treatment that lacks body and personality.

Applied: Bit of creamy sweetness to open up with the vanilla note that quickly devolves into a floral breeze. There’s not enough words in the English dictionary to describe how light this fragrance is. It’s so light that there’s barely an opening, a mid-stage, and drydown. I got the impression of vanilla opening and there is vanilla there but it’s so fleeting and light that it might as well not be there–just like the rest of this fragrance. The mid-stage has a hint of jasmine, something rosy with that bed of vanilla and the drydown is a single burst of air from someone fanning a branch of sandalwood at you. Everything about Pure DKNY is light and waifish. It’s not just a delicate, quiet, little lily of a fragrance in the bottle but it’s also an invisible force on the skin.

Extra: The interesting part about Pure DKNY is the use of Ugandan vanilla which is sourced by a humanitarian organization called CARE that fights poverty. The CARE organization’s goals and visions are fantastic. This perfume is not quite so fabulous.

Design: Pure is bottled in a clear bottle with a clear liquid and the simple word, “Pure” written on the glass. It resembles a bottle of water and the design of the fragrance is fairly decent for what it is and definitely imparts the concept of “pure”.

Now I like light fragrances but Pure DKNY, for what it costs, should at least smell like something more than vague sweet flowers and vanilla. Make no mistake that while I’m not at all partial to Pure DKNY, I appreciate the humanitarian visions that CARE strives to achieve. Check them out, but skip this fragrance.