Idylle was the first mainstream released fragrance by Guerlain’s new in house perfumer, Thierry Wasser. The lack of the Guerlinade is noticeable in this one and in its absence is a fairly plain, fairly boring, modern mainstream scent. Good for wearing, great for the office, but missing the heart of what Guerlain used to be. 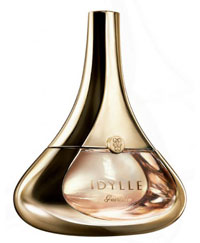 In Bottle: Idylle is a pretty surface floral with a bouquet of pretty young flowers. This scent starts off smelling young and dewy and fresh. It’s reminiscent of pretty much every other modern floral fragrance that’s been released in the last decade.

Applied: I smell Idylle in a lot of places. It’s wearability is outstanding if you’re looking for a modern Guerlain that works well with the modern staple. Don’t look for anything classic smelling in this–it’s not there. I am a little disappointed with the fragrance to be honest because it’s so benign that it’s rather boring. Idylle’s opener smells of rose and lily off the bat. It’s a well blended thing that slips into its mid-stage with so much elegance that you’ll have barely noticed it until you catch the floral heart and realize your fragrance has changed for the better. The rose note is the predominant player in this but it’s a cleaned up, fresh rose. Not at all like Nahema’s deep red rose. Idylle stays beautiful and remains on the skin until the dry down where you’ll get a cleaned up patchouli that smells like scrubbed earth and polished darkness.

Extra: Maybe I’m being harsh on Idylle. It is at it’s core a very pretty and competent fragrance that will please a wide audience. After all, how I can dismiss Idylle when I loved the much loathed Champs Elysees? Or My Insolence? I by no means hate Idylle. I just don’t think it’s particularly interesting. It’s fantastic as a mainstream release. It’s like a more competent Gucci Flora. A more grown up Gucci Flora, if you will. I guess I just miss the classics and was hoping Idylle was a bit more classical and less modern. More niche and less commercial.

Design: Idylle’s marketing surrounded the concept of golden raindrops. The bottle is shaped like a golden raindrop. Despite the interesting shape, it is easy to hold and easy to spray. It looks interesting on display and is a great looking piece to add to a bottle collector’s array.

Idylle is what the industry refers to as a modern chypre. A formulation that so far has been fuzzy to my understanding.