Black Phoenix Alchemy Lab’s Tamora seems to me like it should smell like a warm fruity floral with a bit of woodsiness. But what I get is an interesting blend of peaches and woods instead. 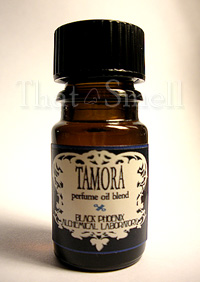 In Bottle: Woodsy florals with the heliotrope being a dominant note followed by the dry sandalwood and a touch of flowery peach. There’s a bit of warmth and amber to this too.

Applied: Like with a lot of BPALs I get a collection of scents from the get go that doesn’t follow a traditional fragrance pyramid. So I can tell you there’s strong peach in this and a dominant sandalwood on my skin and to my nose along with a sweet note that hangs out during the entirety of the scent. Heliotrope makes a wavering effort to be noticed here and there but the real stars are the sandalwood and peach team to me. The amber lends a nice warmth to the fragrance that comes in rather quickly and hangs around for a nice while. The vanilla in the fragrance isn’t detectable on me until the sandalwood calms down a bit and once I smell the vanilla, it is an interesting powdery vanilla treatment with a slight hint of dirtiness thrown in there. Very interesting, though not to my tastes, this is a little fun romp through an unconventionally built fruity woodsy scent.

Extra: Tamora is a member of the Illyria line from Black Phoenix Alchemy Lab. Its name was based on a character of the same name from the Shakespearean play, Titus Andronicus. Tamora was the Queen of the Goths. Which I just find is delightfully hilarious.

Design: Tamora is bottled in much the same shape and style as older style Black Phoenix Alchemy Lab bottles. You’ll note the bottle pictured in this post differs from the usual. This bottling style with the blue glass was abandoned in favor of the newer bottles with the amber glass. I can’t positively date this particular bottle of Tamora but if I were to hazard a guess, it’d be pre-2006 but I can’t be 100% sure. If anyone can positively date the bottle pictured above, I would be grateful.

I’m actually not a big fan of Tamora because I feel the sandalwood was a bit too overpowering. Still Tamora’s a nice peachy scent with an interesting mix of sandalwood thrown in there.