If popularity made a fragrance iconic then Love Spell should be the staple of teenage girls. This is a familiar fragrance to me, partly because of its fruity floral composition but also because so many women and girls wear Love Spell, its perfume form, body mist, lotion and what have you. It is a simple fragrance, a little low on the complexity meter but what it lacks in complexity, it makes up for in wearability. 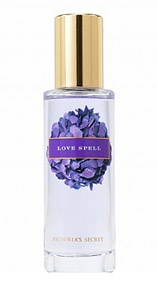 In Bottle: Sweet, sweet, sweet. The first smell I get from Love Spell is a sparkling peach and jasmine fragrance. It’s like high school exploded in my nose and all I can smell is the trademark sugary peppiness that I was so familiar with. I remember when every other girl smelled like fruit or candy. I was the odd one out with nothing but a stick of deodorant between me and nothing. Now that I can experience all the fragrances I couldn’t wear when I was younger, I have to admit, I do see why this was popular. But its very essence, to me, screams of high school.

Applied: Simple and inoffensive, that first whiff of bright fruits and florals is quick to start dissolving on the skin. It morphs away from brightness and into a near sparkly plastic-like fragrance for a few moments. I’m sitting there wondering if these flowers and this strange slippery plastic smell is going to stick around for a while. It kind of reminds me of a banana peel, slippery, fruity. I can almost taste that strange note which is funny. The banana fades the more I smell this as something aromatic that resembles culantro comes up and dominates the scene. Culantro, not to be confused with cilantro, is an herb. Unfortunately for the culantro and the florals, they evaporate very quickly and re-application is necessary. And with reapplication comes that sparkly banana again. I like the opener. I like the drydown. The culantro scent is an interesting touch that I don’t mind. I could probably do without that strange moment in the middle with the banana.

Extra: Love Spell has that aura about it that screams of high school. There are fragrances out there that just seem to speak volumes about the culture that might surround them. Sweet, fruity, floral perfumes for example are usually in the category of young. Whereas deeper, denser more powder fragrances tend to be lumped in with the old. Me, personally, I don’t much care if I smell young or old. If you like a fragrance, just wear it.

Design: Simple but not ugly. I’ve got no qualms with fragrances that stick to simple packaging. Especially ones that are more affordable like Love Spell is. The EDT will run you around $8-10 depending upon the sale going on at the moment. This fragrance comes in a purple box. Inside is a glass atomizer bottle with a cap over it. On the bottle is the name of the fragrance and a purple flower design.

I still remember the big fragrance going around the school locker room when I was younger. It was Hawaiian Ginger by Calgon. It seemed literally every girl was wearing this as everywhere I stepped in the school, in wafted Hawaiian Ginger. Turns out it was only a couple of people who wore this fragrance and evidently they were battling it out for Hawaiian Ginger supremacy because the fragrance permeated the entire school.

I’ve noticed, very recently, that a lot of people seem to be concerned about synthetic notes in perfume. As more and more people are subscribing to natural living, eating organic foods, wearing organic cotton, using organic detergents, the eye of concern has shifted onto this generation’s health crisis. No, not obesity. It’s cancer.

With media outlets reporting on the evils of “chemicals” and how they cause allergies in some people and could be carcinogenic for others, I see more and more concerned consumers turning away from synthetic notes used in perfumes because they’re afraid of cancer. Some consumers refuse to wear perfume at all, claiming that they’re all laden with these horrible chemicals that will cause a host of medical problems. But how true are the rumors? Do synthetic notes really cause cancer?

Let’s start from the top and gain a general understanding of what a synthetic fragrance is and what synthetic perfumery is. I tend to veer away from calling synthetic perfumery by certain names because of the instant negative reaction I get from people. Say the word, “chemical” in front of some people and watch them close their ears. Instead, I’ve taken to calling it “constructed perfumery”. Not the most technical of terms but at least I get my foot in the door.

Synthetic fragrances are constructed by the molecule or are isolated components of more complex elements. They are synthesized raw materials that go into making a fragrance. People use synthetics in perfumes because they can achieve more pure and more consistent scents than using natural raw materials. For example, raw material vanilla can have its major component isolated. Vanillin is the primary component in vanilla beans isolated and used in perfumery for its stability and cost effectiveness. Aside from a small amount of natural vanillin isolations, the majority of vanillin we encounter is synthetic.

See, natural vanilla extract takes more time to produce, costs more, is rarer and, therefore, expensive. The stuff you buy at the store called vanilla extract to use when baking cookies and cupcakes is actually mostly or entirely vanillin. See, in 2001 around 12,000 tons of vanillin was needed, but natural vanillin only covered around 1,800 of those tons. The rest was synthesized chemically. Chances are, you are using a synthetic if you have ever used vanilla extract that wasn’t stated as natural.

Vanilla extract has hundreds more components in it than vanillin, giving it a richer, more complex aroma. Due to this added complexity, natural vanilla used in perfumery may alter the fragrance depending upon the batch of vanilla used and the skin chemistry of the individual using it.

While skin chemistry and natural components makes for a unique, complex and interesting experience getting a bad batch of oil is not interesting in so much as annoying. Therefore, this morphing of scents due to batch disparity can cause major problems with fragrance consistency. So you can see when you’re trying to deliver a consistent product to a consumer, you don’t want Cassie smelling like a beautiful vanilla floral bouquet while her friend, Joan, smells like a pile of plastic doll heads.

Another reason synthetics are used has to do with quality control. Natural raw materials are often directly harvested from a large amount of ingredients. Most of the time, from flowers and plants. Take rose oil for example, a natural that requires pounds and pounds of roses to make an ounce of rose essential oil. How much rose essential oil you receive at the end of the day depends heavily on how much crop was yielded. Any farmer will tell you that crops vary from year to year depending upon the weather.

Finally, synthetics are used because they are more cost effective. Consider the manpower and space that would be required to plant and then extract rose oil. You need workers to plant, tend and pick the roses. You’ll need workers to extract the oils too. And all this for a precious one ounce vial of the stuff. Think about all the labor that went into producing it, how much time it took, and sheer luck. All these factors add up to a more expensive product.

So now that you know why synthetics are used, let’s get to the meat of the issue. Are they dangerous?

Short answer, synthetics in perfumes are no more or no less dangerous than natural raw materials.

Now let me expand on that before you wander off. I said they are no more or less dangerous than natural materials. The key words being ‘more or less’. This means that natural raw materials aren’t as safe as most people may think. There is a common thread of thought in modern society where people tend to view natural things in a more innocent light, often ignoring the fact that just because it came from nature, doesn’t mean it’s good for us.

I’ll put it to you straight up and I’ll even start with synthetics here to be fair. Synthetics are being investigated for carcinogenic compounds. There are some very early studies that look into the components of fragrances that have found that, if exposed to a large enough concentration of certain synthetics (limonene in this example), certain animals may develop cancer (male rats but not the females). However, they have also found that those concentrations are much larger than what is typically found in fragrances. In addition to that finding, one should also note that substances found to be carcinogenic in rats does not always mean it is carcinogenic in humans.

Consider the alternative, natural materials. Generally credited with being milder, more gentle, safer. It comes as a surprise to me that when people say this they also gloss over the fact that the majority of essential oils from the citrus family are known photosensitizers. Photosensitivity, in regards to essential oil usage, occurs when you apply an essential oil known to cause sun sensitivity (bergamot, lemon, lime, orange, etc.) and then expose the area of skin you applied the oil on to the sun. This results in an increased risk for sun burns and skin cancer.

So there you have it, two examples. And it should be noted that I had a hard time finding an academic source that investigated synthetics in fragrances and any ties to cancer. It should also be noted that citrus essential oils do not cancer in and of themselves but they increase the risk for cancer under certain conditions. Similarly, the studies for synthetic fragrances causing cancer are young and limited at the moment. What results from this comparison is the sad fact that more studies need to be done before a solid conclusion can be made.

Perhaps the most comfort I can offer someone, in my uneducated way, is the fact that synthetic fragrances are often tested and put under testing and have quality controls in place  for safety purposes. The same cannot be said for some essential oils and their usage. For instance, sassafras whose safrole component can cause permanent liver damage in humans if ingested in large enough doses. No one knows if topical application of sassafras will also harm you. Yet it is still purchased, and used in natural perfumery.

This isn’t to say you should suspect or start worrying about essential oils either. Most essential oils are safe to be used in the proper, diluted amounts.  It all comes down to the consumer being aware of the issues. All of the issues. Too many people read one side of an argument and decide that just because it sounds convincing, then it must be true. It does nobody any good to scare people by making devils out of synthetic fragrances before any solid facts have been presented. Similarly it is dangerous to assume that you cannot get hurt using naturals. Remember that nature is a cruel beast and many things in nature can cause harm too. Just be aware.