Watch a few perfume collection videos on YouTube and you’ll start to notice a pattern. Everyone owns relatively the same perfumes and one of the most commonly mentioned is Britney Spears Fantasy. That fragrance in the crazy rhinestone studded ball. So of course I went out to smell it. A scent this popular practically begs to be sniffed. 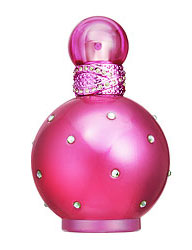 In Bottle: Pink, sweet and candy-like. There’s a huge jolt of sugar. I’m thinking Couture Couture’s sugar mountain has a very likely adversary vying for first place in the tooth decay competition. This doesn’t mean that Fantasy smells bad. This stuff is sweet, but it’s not so sweet that it approaches the point of no return; cloying sweet.

Applied: Sweet fruits with a tiny bit of tartness on the opening. The tartness gives way to more sweetness as the gourmand notes come in for a jam. I don’t believe I could smell a big cupcake but I did smell vanilla and white chocolate that lends the fragrance a very nice creaminess. This is a pretty and edible smell that went from fruits to sugar and candy very quickly. The dry down takes a while as longevity in Fantasy was quite good for me. I get clean, sugary musk on dry down.

Extra: The advertising for this fragrance claims that it’s supposed to signify Britney’s more grown up personality. I don’t know what in Fantasy is supposed to represent that but I don’t have any of it. This stuff is extremely popular with young girls and younger women. I wouldn’t call it anything remotely approaching grown up. But it’s not a bad fragrance. It’s fun, it’s girly, it’s young. Just don’t try to take it seriously.

Design: The design, for me, is repellent. It looks like a number of things but none of those things are particularly attractive to me. I suppose the shape is sort of reminiscent of a fortune teller’s ball and the crystals…eh, I don’t know. Everything from the shape, to the crystals, to the detailing around the cap just isn’t doing it for me. Not me with my clean lines and ultra-minimalism. Interestingly enough the belted design around the sprayer featured in the picture above with the crystals is no longer being produced.

Some of the verbs used for those notes are just silly. But it’s also fun and playful. I can’t take Fantasy seriously. This isn’t the kind of fragrance you wear to a board meeting. However, you could wear Fantasy to the beach, to a hoe down, or a cupcake festival. Basically, if it’s not whimsical and fun it’s not a place Fantasy would fit in.