﻿﻿﻿﻿What can I really say about White Citrus that hasn’t already been said? White Citrus is one of Bath and Body Works’ more simple compositions that’s billed as a modern take on a classic citrus fragrance. Not sure what they mean about a modern take on a classic citrus as this just pretty much smells like a citrus perfume. Nothing classic about it. But it is very good.

In Bottle: Sharp citrus, tangy lemon zest and a bit of sweet tangerine. There isn’t a lot of sweetness in this but there’s a tiny amount that helps to balance out the tartness a little bit.

Applied: Big white florals and citrus fragrance. Heavy emphasis on the citrus. I mostly get the lemon zest out of this fragrance which is tempered a bit by the lily and freesia present in the fragrance. The freesia helps calms the tartness of this scent a little with its floral sweetness as White Citrus lays on the skin like a clean, sheer coating of freshness. This is a nice, competent citrus-based scent with a good level of initial projection. However, due to its citrus-heavy top notes, the fragrance doesn’t last very long or project very far on me so I end up having to layer, layer, layer. White Citrus remains predominantly floral and lemon until it calms down near the end by introducing a barely noticeable and very sheer woody scent on the exit.

Extra: White Citrus is also available in a white variety of other products from Bath and Body Works. This includes lotions, body mists, travel size items, hand soap and probably much more. So if you’re worrying about the scent fading fast, get the lotion, the shower gel, and start layering. For those of you interested in this fragrance and want something that lasts a bit longer, Black Phoenix Alchemy Labs’ Whitechapel is a citrus-heavy perfume oil that has a few familiar components to White Citrus.

Design: White Citrus is bottled in much the same way as other Bath and Body Works eau de toilette fragrances. A no nonsense rectangular glass bottle with a design printed on the front. In White Citrus’ case, the design on the front appears to be some sort of explosion of green, or a graphical representation of a halved green citrus fruit.

I had a small bottle of White Citrus lotion and quickly grew tired of it. A nice clean and fresh fragrance is good for an average day but White Citrus wasn’t as pleasing a citrus-based fragrance as I had hoped.

Lady Vengeance triggered something bright and flowery in my head. I dabbed it on, aimed my nose at the back of my hand to sniff, and as it wafted into my nose and hit my smell receptors, my voice decided it couldn’t wait to form a good sentence as I proclaimed in a high-pitched voice, “It’s so pretty!” 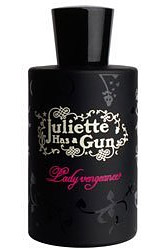 In Bottle: Fresh and rosy and really pretty. Lady Vengeance is a young, bright, happy smelling rose scent that puts a smile on my face the instant I smell it.

Applied: Feminine and clean and speaks to the springtime. I had wholly expected Lady Vengeance to contain a note of darkness, of depth and dense rosiness but she’s a bright and happy character instead. A bit funny for the name but I can’t stay mad at something this peppy. Lady Vengeance starts off with a brilliantly bright and new bloomed rose. It reminds me of a freshly watered rose bush glistening with dew on a brand new spring day. It’s like soft rose soap cut with real petals. There’s a powderiness to Lady Vengeance but there’s very little of it and it works so well in this fragrance that you just end up smelling like a really good rose powder. There’s a slightly sweet and gentle hint of vanilla but it is predominantly a very well done rose. This is a sweetened rose, not a sugar rose–I might add. The latter is the staple of modern rose-based scents that rely on sugaring up the note. Lady Vengeance has excellent longevity, it clung to me all day and lent that gorgeous clean rose for hours and hours until the dry down approached where the powderiness gives way and I smell a couple of whiffs of smooth patchouli under all the awesome rose soap.

Extra: Juliette Has a Gun is a niche perfume line inspired by Shakespeare. It has ties to Nina Ricci. Mainly, the line was founded by Ricci’s grandson.

Design: Set in a very cute black bottle, Lady Vengeance’s packaging would hint at a dark rose. But there’s no darkness in this as far as I’m concerned. The bottle has lovely little etchings in it that conjure up images of tattoos and goths.

Who would have thought a simple fragrance could be so well done? I am a big fan of Lady Vengeance and her pretty rose treatment. For $80 per 50ml and $110 per 100ml bottle. You can also get some pretty wicked looking purse bullets fragrance roll ones for $75. You will be hurting if you’re into this niche line but it isn’t as bad as some other choices out there that would have you proclaiming, “Eighty bucks? That’s nothing!”