Quite possibly Creed’s bestselling fragrance, Green Irish Tweed is a little diddy released in 1985. It has steadily remained popular since its introduction and has spawned a number of copycats. Including the often compared, Cool Water  by Davidoff. 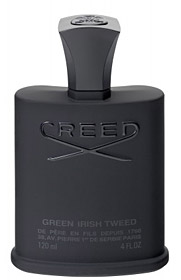 In Bottle: Green and clean citrus note up top. It’s just a touch sweet with a lingering background woodsiness to it that makes this smell very masculine from the get go.

Applied: Nicely charming opening with a strong green lemon verbena touched with a sweet clean note to sooth the opening a bit. As Green Irish Tweed starts to dry down, the mid-stage introduces a very pleasant wet and clean quality to it. There’s a violet leaf, iris and slightly bitter ivy scent floating around in here too with a soft woodsiness lingering throughout. The mid-stage is my favorite part. It’s dry down is a bit formulaic with the sandalwood amping up partnered with a really glorious amber note which helps take the fragrance away with it. Green Irish Tweed a sophisticated piece of men’s fragrance though it’s sometimes hard to give Green Irish Tweed its credit because it has spawned a lot of similar fragrances. So many, in fact, that people may have gotten bored of it.

Extra: This fragrance has been described a great deal of ways, from people saying it smells like boring, over expensive trash or the epitome of men’s fragrances. For me, personally, I like Green Irish Tweed. I can’t wear it because it’s such a recognizable fragrance that’s been so well ingrained as a men’s fragrance. That’s not to say a woman can’t rock with Green Irish Tweed on her. I just prefer to leave this one for the men.

Design: Green Irish Tweed is most recognizable bottled in an all black glass bottle that’s shaped like all the other iconic Creed fragrances for men. I do not own a bottle of Green Irish Tweed but I have held one and it, like other Creed bottles, has a nice weighty feel to it with a good shape that’s easy to hold and spray.

Green Irish Tweed is available in a number of different products if the fragrance doesn’t float your boat. You can get this stuff in a deodorant stick, a candle, or various shaving related products. I should probably take some time to warn you of fake Green Irish Tweeds as there are hundreds of counterfeits of this fragrance out there. It gets a lot of press because Green Irish Tweed (sometimes shortened to GIT) sells for a lot and whoever pays for a fake of this stuff usually ends up being out quite a great deal of money.  There is a fantastic thread on Basenotes that goes over a few fake Creed bottles, boxes, common counterfeiter tricks and shows you some tips you can use to tell the difference. As for advice I can give you to readily use:

1. If it’s too cheap to be true then it probably is.
2. Always scrutinize the seller for more details, more pictures, and don’t be afraid to ask questions.
3. Always try to buy from a seller who will offer full refunds on products sold.
4. Check their feedback. All of their feedback.
5. Pay attention to what the bottle and packaging looks like. Anything out of the ordinary should sound off alarm bells.
6. If the scent is weak, different, or doesn’t last then it could be fake.
7. Don’t be afraid to ask other people who might be able to identify if your fragrance is real or fake. Include pictures to make it easier for us to help you.