I’m going to make a deal with you guys and myself. I’m going to review this thing, then I will absolutely not mention Lady Gaga or Fame again for the duration of this year. I think we’d all like to move on, and I was almost going to pass on even trying this because of how bored I got with the marketing. So, I promise, this one last post and then no more. 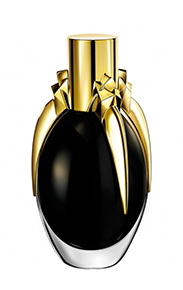 In Bottle: If I had any expectations that this would smell anything different than a generic fragrance then I would like to once again concede my disappointment. Fame smells of slightly synthetic honeyed florals and the barest glance of vanillic incense.

Applied: I aimed a spray of this on my arm was fascinated to see the black turn clear. And that was probably the most promising thing about Fame. I will say upfront that if you expected this to be bold, unique, or interesting then you might be in for a let down. Fame starts off with a synthetic blast of fruity florals. I can’t really tell if the synthetic waft I got came from the purported belladonna note or the honey note they used. Maybe it even came from whatever agent they used to turn black liquid into clear liquid. Whatever it is, it smells faintly of chemical and plastic on application. Rest easy though, that stage of it lasts for a few seconds and Fame settles down into a honeyed apricot floral fragrance. It is very apricots and jasmine based with a thick coat of sweet honey. After the very generic mid-stage, Fame dives into a slightly more interesting saffron and incense with florals dry down. The dry down gives off a smoky saffron (smells a bit like vanilla to me) twist to the generic florals, but it’s really late to the ballgame and to be honest, the incense is lightly used which makes the dry down even less noteworthy.

Extra: Fame has been causing a huge buzz in the celebuscent circles for months and I’m particularly happy that it’s finally released and we can hopefully move on from here. Fame was developed by Coty with some sort of collaborative effort from Haus Laboratories. The fragrance was apparently marketed as having new technology including the black liquid and some nonsense about it being “push-pull” where the notes weren’t going to work in a typical pyramid fashion. I don’t know where they got that one because 1) perfumers have already been making that happen for years, and 2) I experienced a mostly linear progression.

Design: What Fame does well is mix Lady Gaga’s style with the design of the bottle. It very much reminds me of her while at the same time forces me to draw some similarities to Thierry Mugler’s designs. It’s Alien-esque, but I think it works well for Gaga’s image. The bottle isn’t ugly, but at the same time it’s not my kind of style as I’ve confessed before that I find most Mugler bottles to be a bit of an eyesore. Still, it felt nice to nice to hold and was easy to use. I’m not going to be buying it for looks or smell any time soon though.

Now, if you’re a huge fan of Gaga, I don’t think my review is going to curb you away from buying this. If you aren’t a fan of Gaga and just want to know if this is anything at like Mother Monster, then I’ll save you a trip to the department store and say, “No”. Fame is very pleasant, not gross or weird, but really generic and easily beaten by more competent honey fragrances such as Tokyo Milk’s Honey and the Moon or for a less gourmand and more floral scent, Aftelier’s Honey Blossom. If you want Gaga branding, go with Fame. If you want an actual interesting and beautiful honey floral fragrance? Seriously, check out Aftelier’s Honey Blossom.