I know I haven’t done any reviews of Lancôme’s fragrances because very few of their fragrances interest me. The scents are fine, of course, but they all seem to hit an off note on my skin. 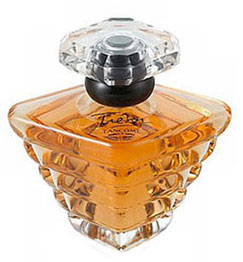 In Bottle: Very strong but the notes are all blended together to form a rather generic perfume scent that isn’t very pleasing to me. It’s generic-smelling right from the get-go and that disturbs me a bit.

Applied: Goes on with a slightly fruity and sweet sheerness that’s rather pleasant. A powderiness approaches the opening turning the fruity sweetness into something akin to sugar dust. The florals amp up next taking the scent into the mid-stage with a sweet jasmine and rose combination. Now, jasmine and rose are two of the most common floral notes in perfumes and the result is a rather generic floral scent unless something else in the fragrance is helping it hold its own. So far Trésor’s sticking to a pretty generic scent as the jasmine and rose combination dominate the mid-stage with a few wafts of iris and that sweet sugar dusting wiggle in and out of the scent. The dry down is an unremarkable affair too with a sandalwood note layered over vanilla and a very subtle dirty amber note.

Extra: Trésor’s considered to be a classic smelling perfume amongst some circles. To me, she’s not so much a classic as she is a generic. I smell Trésor and I think generic floral mostly due to how strong the jasmine and rose notes were in the mid-stage for me.

Design: Trésor’s design is an interesting jewel-like bottle. It also bears a resemblance to a pyramid in a way and reminds me also of honeycomb. I don’t know why but the design is decent, not garish but not exactly to my tastes. I do think it is well done though.

What I think of Trésor I can pretty much apply to the other fragrances from Lancôme. At least for their recent releases anyway. I haven’t had the gumption to dig up a sample of Climat though I have it on good word that it’s a beautiful piece of classical perfumery.

Still working up to my ultimate appreciation of Yves Saint Laurent’s Opium. I decided that since I wasn’t able to work myself up to Opium yet, I should start with Opium Light, as I call it. Otherwise known as the limited edition Summer Opium Flankers that feature Fleur Imperiale.

In Bottle: Definitely Opium based but the original fragrance has been reduced from its big flashy self to a lighter pleasant base for a layer of clean and sheer woods.

Applied: Neroli and Jasmine make a first impression as the Opium base matures and sticks around for the mid and dry down stages. Over Opium there is a nice, dusty sandalwood that covers the fragrance in a clean twang. The rest is handled by dry osmanthus and cleaned up myrrh. At its heart, this is a more flowery version of the original Opium. Carnation is used sparingly in this giving the fragrance a bit of floral spice. Not a lot though so if you were concerned about it, don’t be. Fleur Imperiale smells exotic. Like a nap under the shade of a tree in a desert  palace. It helps that Fleur Imperiale is a dry, warm, clean scent as its approach on dry down is a parched but beautiful myrrh-backed, golden vanilla amber.

Extra: Great introductory fragrance to Opium, the classic. Even though this is a flanker one wouldn’t venture to purchase a flanker if they didn’t like original Opium. I urge you to try the summer limited editions, however. Particularly Fleur Imperiale and Shanghai. They are toned down and more sheer. Great for anyone hesitant and anyone who wants to come to understand and appreciate Opium for all its earthy, spicy goodness.

Design: I love the design on this bottle. It’s shaped like Opium with pretty red flowers on the glass. My major complaint, however, is the plastic sprayer and plastic cap. Okay, the plastic caps are common and I should stop raging about those now. I can dig that. But a plastic sprayer? Come on. Every time I go to spray this stuff, I’m worried the plastic sprayer is going to somehow break or worse yet, break off. The plastic sprayer just feels and looks cheap. I’d like a hardware upgrade (too late for that) but other than that, Opium Fleur Imperiale is a pleasant thing to behold.

I was very  impressed though a little disappointed by how similar Fleur Imperiale and Fleur de Shanghai are. There is a minor difference though as Imperiale is decidedly warmer and lacks the gentle sweetness.