Something about apples just draws me in, I guess. One would think an apple bottle would a bit silly but Lolita Lempicka’s designs have always had these fascinating shapes with interesting textures and line work on them. The bottle for Lolita Lempicka drew me in, the fragrance kept me around. 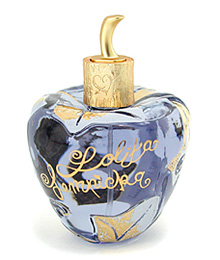 In Bottle: Sweet and spicy, almost woodsy quality in a way. I can smell the licorice in this along with a very fresh, almost fruity note right up top.

Applied: I smell apple opening this fragrance. I swear I do. I don’t care that the notes don’t list it, it’s right up there to my nose. Big inertial apple. Then it disappears within seconds to be replaced with this green sweet spice scent that is anise. As the fragrance ages, Lolita Lempicka turns into a vanilla spice fragrance with that faint sweetness of licorice. Despite all the gourmand notes in this one, the scent as a whole doesn’t strike me as a gourmand immediately. It needs to settle into its heart notes before you really start to see where it’s coming from. The fragrance dries down to a soft sweet vanilla scent.

Design: More truly apple shaped than the Nina by Nina Ricci bottle. Lolita Lempicka’s bottle is a purple apple with leaf and swirl linework in gold and muted colors. The design is whimsical, young, fairytale-like with a nice final touch of the sprayer that resembles the thin and delicate stem of the apple. I would have preferred the sprayer to be made of more sturdy material since it is so thin and delicate but it works just fine for what it is.

I don’t much like licorice, or how it smells. But Lolita Lempicka makes it acceptable for me by mixing it in with other notes. It is one of the better done gourmands out there. Sometimes compared to Angel by Thierry Mugler. I personally don’t see the connection as Lolita Lempicka is drier and less sweet to my nose.