Angel is one of the most widely imitated fragrances. It’s introduction in 1992 changed the fragrance world. It became incredibly popular and still remains popular as people still rock this scent up and down high school hallways, fashionable city streets, and unfortunately for the rest of us , on the elevator. 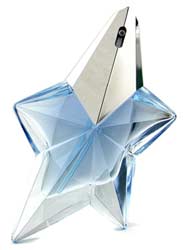 In Bottle: Beware of your first smell of Angel as your first impression will likely be something to the tune of, “Oh God! What is that horrible smell? Get it out of my nose! Aaaah!” Your second smell will yield an intriguing, jarring mix of bitter, spicy patchouli blended with rich, warm chocolate and some fruit.

Applied: Angel starts off with a typical citrus burst that disappears to lead you in on a roller coaster ride of gourmand thrill. The patchouli wastes no time on me to get straight to the point. It comes out of the gates, announces itself and drags the rest of the fragrance in. What I get is a mish-mash of sugary fruit. The chocolate is quick to come up with its creamy, warmth. The candy-like sweetness of the caramel mixed with vanilla is always present in Angel. Like a syrup cloud hovering over an outdoor chocolate fashion show. What? Too weird? How about the idea of dipping your chocolate bar in caramel and vanilla extract and then dropping it on the lawn? The dry down doesn’t come in until hours later when you’ve had just about all you can of the chocolate and sweetness. Where upon drying down you get more chocolate, sugar and patchouli. Hope you liked the ride.

Extra: Angel is strong. Mercilessly strong that its introduction in the 1990s could have been pushed up a few years into the Powerhouse Era and people would still say it’s strong. Go easy on this one, folks. You will be smelled from a mile away. And if you do happen to put too much on, avoid crowded elevators.

Design: Angel comes in a variety of bottles, concentrations, flankers and other products. The most iconic and instantly recognizable is the slanted star bottle design shown above. If you don’t like that one, there are many more. Most Angel bottles have the added bonus of being refillable too.

I wrestled with whether or not this fragrance could be considered a classic. Considering its iconic rise to fame and its still firm grip on popularity, I decided to just hand the label over. Not to mention the fact that it’s so instantly recognizable to so many people.

If you’re like me and you lack any sort of French language skills, you’ll probably find yourself at one point struggling to figure out how to pronounce some of the fragrance house names. If you’re also like me, you’ll go through the majority of your young life saying it wrong and liberally confusing everyone you try to communicate with as you tell them the fragrance you’re wearing is by “Theory Muggler”.

Here’s a guide on how to pronounce some of the fragrance house names. Please understand that I am not a French speaker and how I pronounce these names is as close an interpretation as I can get to the actual pronunciations. If you have a better suggestion or have a correction, please let me know.

For more (and in audio) pronunciations check out Frag Name of the Day.