Jasmin and almonds, two of my favorite smells combined into one awesome fragrance? That’s Jasmin Noir from Bvlgari. 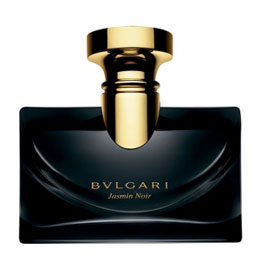 In Bottle: I get light florals and a heavily licorice-infused almond and jasmine scent.

Applied: Light jasmine on the opening as the fragrance quickly mixes the jasmine and florals with the warm, licorice-sweet almonds. I love the progression. It starts off no-nonsense and like the no-nonsense fragrance that it is, goes on to its mid-stage almost right away. Now the mid-stage is marked mostly to me as a floral almond licorice mix. Reminds me a bit of Lolita Lempicka but with less gourmand and more floral. A great mix, for sure. It’s sophisticated and different, a little discordant but in a good way. The dry down is marked with more licorice, faint woods, and a hint of something smooth that might be the tonka bean or even a vanilla at work.

Design: Jasmin Noir is bottled in a dark glass flacon with the signature dip in front. It has a golden cap with the house name on the top. And the fragrance’s name and house are written on the glass on the low point of the dip. I rather like the design, it’s simple and the look has–to me–been distinct and popular enough that I do see this bottle a lot and it is immediately recognizable.

I really do like Jasmin Noir. It did the jasmine note very well and the almond note was just a bonus. I don’t like licorice much myself but the licorice is well used in this fragrance to the point that it may have swayed me from the licorice-haters club to the licorice-lovers club.