With the way work has been ramping up lately, I haven’t had the chance to get my nose wrapped around much but my usual standbys. So, when I discovered the local mall had a bottle of Madonna’s Truth or Dare sitting out, I shrugged my shoulders and thought, “Well, why not? I’m here already.” 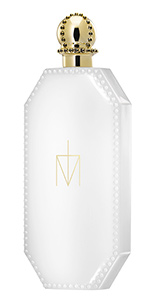 Applied: Yikes. Tuberose. I know this scent gets compared to Fracas–the cheeky Tuberose Queen and I definitely get that impression. Truth or Dare opens up with a powerful hit of sweet tuberose followed with a barely-able-to-contain-itself gardenia note that furthers the floral interpretation. The fragrance is so sweet and floral that it obliterates any other smell to my nose can pick up and starts to smell like plastic a couple of minutes into wear. By the time hour two rolled around, I was trying to scrub it off because I smelled overwhelmingly like plastic. And of course, like with most fragrances that don’t agree with you, this just wouldn’t come off. So I did the only logical thing; I sprayed some more on, in a different location, went home and sat out the fragrance so I could at least take notes on it, review it, and never touch it again. The longevity is fairly good, lasting quite a few hours on me before it tried to exhibit any other kind of personality. Truth or Dare gets a bit less tuberose near the end of its mid-stage and focuses a bit more on this nice creamy, vanilla with some plastic stretched over it. But for as long as I could still smell it, there was that sweet plastic tuberose note dominating the entire scene.

Extra: Truth or Dare was launched earlier in 2012. The fragrance was composed by Stephen Nilsen.

Design: I can’t say I see the beauty of this design. The bottle is a white glass, but looks like it’s made of plastic until you touch it. The cap is a gold plastic, molded with these little studs, it looks a bit inappropriate and doesn’t quite do the fragrance any favors. All right, I admit, the thing is downright ugly. I think those studs or raised bumps on the bottle are taking it from “plain but looks all right” to “fugly” territory. I’m just a fan of the aesthetics this time.

I was actually hoping this one would work out, having heard how classical it was supposed to be. Having heard how similar to Fracas it was. But unlike Fracas, it overdoes the tuberose and not in a good way. I think I’ll stick to Fracas.