As of January, I have officially aged out of the demographic for this fragrance–according to their ad anyway that said With Love by Hilary Duff has an age range of 15-24. So I’m a few days too late to be in with the Duff crowd. With Love still smells okay. 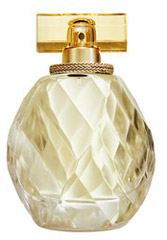 In Bottle: Fruity, tropical, sweet. The hallmark of most celebrity perfumes. Sometimes they’re tropical, almost always they’re fruity and sweet. With Love doesn’t bring anything new to the table here.

Applied: Blast of tropical fruit, that mangosteen note seems to be working overtime. It takes a little while for the fruitiness to settle down where we’re treated to a warmed up woody fragrance with a surprisingly interesting deep milky amber quality to it as well as a spicy note with a hint of clove. This is a shocker, given what I was experiencing in the opening. It’s still sweet, but it’s warm, smooth woodsy sweet now. This is a few steps above sweet fruitiness which is what everyone else seems to be doing. The fragrance further ages, leaving more sweetness behind as it dries down to a respectable but somewhat dull woodsy scent, losing some of its warmth and amber in the process but retaining the smoothness. Nonetheless, I was pleasantly surprised by the mid-stage, bored by the top and dry down though.

Extra: With Love was surprising to me. I fully expected fruity floral going in and there’s some of that but it’s a rather competent scent for a celebrity perfume. One of the better ones out there, I’ve got to say. With Love was launched in 2006, it is also a song by Duff and has a flanker called Wrapped With Love.

Design: Something about the bottle’s design reminds me of Parisienne by Dior. Anyway, the bottle is attractive enough. It’s got a neat texture on its glass with an interesting gold head ornament. It sort of looks like an earring or a pendant. Not ugly, not the nicest bottle. It’s just okay.