Usually when a fragrance company says they’ve taken one of their classics and ‘modernized’ it, big red alarms go off in my head. I’ve never had the pleasure of sampling the original Fougere Royale from 1882 and the oldest vintage I’ve even seen was on an eBay auction of questionable quality. So I went into this 2010 reformulation with as little knowledge of the original perfume as possible–being ignorant of the original fragrance, I’m going to have to say Fougere Royale 2010 is pretty darn good. 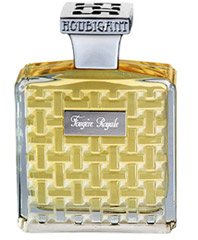 In Bottle: The lavender note is rather strong in this, dominating for the moment over the green herbal quality of the fragrance. There’s a spiciness in the background that blends in beautifully with the rest of the fragrance making Fougere Royale smell  sophisticated.

Applied: Opens with a clear greenness to it layered over a lavender note that’s helping a spicy floral note along that might be the carnation. As the fragrance heads into its midstage the lavender sticks around but also blends in with a strong herbal note that I presume is the clary sage. There’s a lot of complexity in this fragrance but I can pick out a few key notes here and there. Most notable is the lavender, then the sage and a spicy note in the midstage where I get the cinnamon notes. The final dry down is marked with a creamier personality as the tonka and amber notes come up to blend with the herbal and spicy notes. The lavender is still faintly recognizable in the dry down as well.

Extra: Fougere Royale has had a tumultuous past, much like the fragrance house that originally released it. After its release in 1882 it has gone under numerous reformulations. Like with all modern fragrances, any oak moss note is likely to be synthetic or a substitute. The original Fougere Royale was composed by Paul Parquet and was considered one of the first modern fragrances thanks to its use of synthetic coumarin. The 2010 version of Fougere Royale was composed by Rodrigo Floures-Roux (Clinique Happy, John Varvatos Artisan and Artisan Black).

Design: Fougere Royale 2010 is designed to appeal to a more masculine audience with a square-ish bottle featuring cut patterns in the glass. The bottle reminds me a bit of classical fragrances but also remains a little bit of modern appeal. It’s a pretty good design that does the fragrance and its history justice, in my opinion.

I do believe Fougere Royale 2010 did the best that it could with a notes list from the 1800s that would have been expensive and near impossible to replicate now. I don’t doubt that 2010’s version and the fragrance from 1882 would smell drastically different but the 2010 version is a great fragrance nonetheless.