I will admit that I was initially drawn to gs02 and the other scents in the latest release from biehl parfumkunstwerke because I was getting tired of picking scents based on their names. The letter and number combo lent some anonymity to the fragrance and made it seem like whatever I’d get, I wouldn’t be influenced by the name chosen by the house. What could get more anonymous than a scent called gs02? So having had no prior knowledge of the scent, no idea what notes were in it and only a write-up by Jeffrey Dame of Hypoluxe and a sample card to go with, I dove in.

In Bottle: Sharp and cool, refreshing, especially after walking around outside. Clean, too with a light floral impression on top of a bed of herbs.

Applied: Cool application, somewhat sharp. I get a slight hint of woods, like a slightly smoky wood. gs02 evolves into a smooth light floral with a touch of spice and woods. The longer this wears, the more I get the impression of something darker, like a leather trying to peek around the corner of some trees. The drydown has a smoother woodsy interpretation with less spice, no florals and that elusive leather is no where to be seen. Everything is generally softer on the dry down though very much present. It’s clean overall, fresh on the open, woodsy and supple in the midstage and soft on the dry down.

Extra: This one is a full on niche from biehl parfumkunstwerke and composed by Geza Schoen, the nose behind Clive Christian’s 1872 and other fabulous scents like Eccentric 02 from Eccentric Molecules.

Design: Minimalist bottle design, which for a series of fragrances like this lends towards the luxury and concept rather than takes away from it. These bottles fall into the aesthetic category of, “line them up in a row and stare at them all day”.

There’s something to be said for the clean, crisp, sharp impression of gs02, though some consider it polarizing. I’ve seen reactions where people said it smelled like body wash. And having used my husband’s body shower now and then, I can attest that the association is definitely there. But gs02 has an understated, underlying complexity that you just can’t get out of a bottle of Nivea.

Hugo is your run of the mill fresh aquatic that doesn’t bring much to the table and doesn’t leave with much either. The tide of aquatics has petered out in the latest years as the incoming flood of fruity florals starts dominating the scenes. Some of these are works of olfactory art in their own respect while others are forgettable. And some even regrettable. Unfortunately for Hugo, it was one of the less notable aquatics of its time. 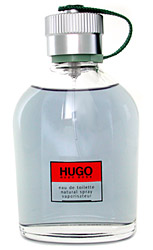 In Bottle: Green and blue aquatic. Fresh, sharp, and a little bit spicy. The herbal notes up front are paired with pine and citrus.

Applied: The green flare, just a touch sweet before it settles into its spicy woodsiness where the pine is predominant on me. I smell kind of like one of those pine-shaped air fresheners you use for your car. Not unpleasant, I just have a strange association with anything pine scented. Well, perhaps not strange, just persistent. The scent stays with pine as it introduces a few spicy herbal notes into the mix. Hugo takes a turn for the interesting near the complete dry down stage as it leaves its fresh pine-scented herb garden and veers toward a darker, murkier, funnier funky note that’s reminiscent of the blast of aquatics upon application. It’s fleeting though, a one or two second moment that could just be me. Hugo dries down to a benign woodsy, spicy, fresh accord that doesn’t make any presumptions and doesn’t even want to think about standing out.

Extra: Hugo Boss fragrances have largely been a miss for me. The only one I can say I actually like is Deep Red. Even then, I don’t particularly like it that much. I can say nice things about it though. But this fragrance, it’s the generic men’s scent with the all too familiar aquatic citrus opening, the woodsy spicy middle, and the miasma of leftover freshness at the base.

Design: I could give or take with this design. It’s clean and simple and functional. Holding it is easy. Spraying it is easy. Kind of looks like a water bottle which is a bit cheesy but overall, not bad.

Yeah, I definitely cannot get past the predominant evergreen scent in this. Too much pine, maybe, or maybe I’m just not the kind of person who likes that in a scent.