Everyone has that one fragrance in their collection that looks out of place. For me, it’s Britney Spears Midnight Fantasy. Having tried the original Fantasy and not really finding it all that special, Midnight Fantasy struck a nice balance between sweet, fruity, and creamy without being over-the-top about anything. “It’s a nice enough perfume.” Is probably the first thing I utter when someone finds the studded purple bottle. 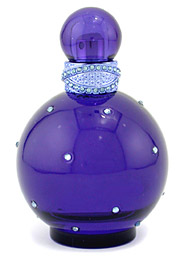 In Bottle: Sweet, candy-like berry, and green notes with a tart citrus that prevents the whole thing from falling apart.

Applied: Like a big bowl of ripe blueberries, layered with vanilla frosting and presented on a cool spring day in a flowering garden. Midnight Fantasy (despite the  PR) is not trying to be anything else but what it is; a simple, young, fun fragrance that isn’t meant to be taken seriously. It’s hilariously fruity, very sweet, and absolutely offers no explanation or apologies for it. I like its zing. Starts off with a clean, fresh spray of tartness followed by a sweet blueberry and blackberry middle that hangs out with a creamy vanilla note until it dries down into a sheer vanilla fragrance. There isn’t a whole lot of complexity here and Midnight Fantasy doesn’t even try to pretend it’s anything but a synthetic.In fact, I find I have to take breaks in between smelling this because two days in a row and the synthetic quality of it just gets to me. But hey, I can enjoy a good synthetic now and then, you don’t go out wearing Midnight Fantasy for the complexity.

Extra: Midnight Fantasy is a flanker to the original Fantasy. While these two smell very different, they do have thematic similarities in the treatment of the sweet notes. And, don’t worry, Britney didn’t concoct this on her own. It was created by Caroline Sabas. A real life nose who composed Midnight Fantasy for the Elizabeth Arden company.

Design: Packaged similarly to the original Fantasy, Midnight Fantasy is a deep bluish-purple with purple crystals set into the bottle’s glass. It remains as unappealing in terms of aesthetics as ever to me.