The title of this one alone kind of made me swallow hard. Not so much because it was long and difficult, but rather I wasn’t sure how my blog would wrap that title. I love the title though, Luctor et Emergo. You saw that to somebody and they’ll probably think you’re casting a spell on them. Bonus points to this one for having some of the most interesting notes, grass, almonds and sour cherries piqued my interest the most. 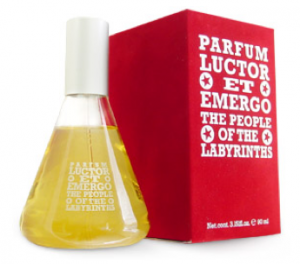 In Bottle: Probably the most interesting experience I’ve had in a while with a fragrance. First spray reminded me of a very expensive rum I had once. Aged some strange amount of decades, it came out smelling very similar to this. Like woody barrels, almond and a bit of spice.

Applied:  The application wasn’t much different to me than the off-skin sniff. It smelled of that aged rum, almond, a hint of vanilla, wood barrel and a sprinkle of spice. It smells tasty, but the initial burst of rum makes way for a predominantly woodsy scent. I smell this and I think of cherries and pencils. It harkens me back to elementary school, sharpening my pencils at my desk a tube of cherry chapstick wedged in the corner of my desk drawer. I liked collecting the curls of shavings because I thought they looked beautiful. It’s a good memory, and I think a nice way for me to describe Luctor et Emergo. It’s the shaving curls off of sharpened pencils. Rolled into little ribbons of wood, collect them together and make a nice masterpiece. I get a bit of the almond in this as well, sweet and mild and working with a hidden vanilla note. The longer I let this age, the more the woods grow on me. They’re pleasant and tempered woods. Not the screaming harpy that I often associate with cedar. These woods are soft and pretty and nostalgic. I actually really love this, just for the memory spur alone.

Design: I have to admit, I’m not sure I’m a fan of the bottle design. Something about it reminds me of a nail polish bottle and I think it’s a part of that design sensibility that faded away a bit in the 90s.

The opinion on this one seems mixed across reviewers. I personally like it because of how nostalgic it made me feel. Hard to believe because I distinctly remember having not that greatest of times in elementary school. But I suppose the reminder of those pretty pencil shavings was something I missed. You can get Luctor et Emergo from Olfactif or LuckyScent.