After buying some candles at Bath and Body Works, I found that I had a choice of a free item. So I wandered about the store and picked up the Coconut Lime Breeze fragrance and gave it a sniff. Its similarity to Coconut Lime Verbena is probably not a coincidence, but the two aren’t exactly alike. 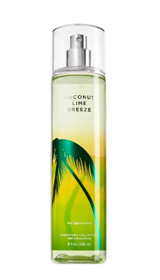 In Bottle: Sharp citrus scent with an equally heavy layer of coconut.

Applied: Pretty much the same impression I got in the bottle. There’s a stronger citrus element in Coconut Lime Breeze than compared to Coconut Lime Verbena. The fragrance opens with a rather strong blast of lime followed by a bergamot and citrus zest scent. It digs more into its coconut notes in the mid-stage where I get the occasional waft of florals and vanilla. The stars of this scent, though are quite obviously the coconut and the lime, with a little more emphasis on the lime. That is how the scent starts and that is how the scent ends–with the classic blending of coconut and lime. Now, I love coconut anyway, and clean coconut tends to behave a bit better to my nose because the clean or sharp element helps mask the often synthetic smell. There is a harshness to this fragrance though. It’s not a game-breaking harshness like the overuse of cedar in some perfumes. The harshness here has to do with the lime being a bit aggressive and astringent. There’s not much in the way of progression as you will start with a sharp lime and coconut scent and end with a softer lime and coconut scent. It’s a good combination, there’s a reason why musicians have lyrics to the combination of coconut and lime and it’s because they work well together.

Design: I was delighted to see Bath and Body Works had changed their body spray packaging from the somewhat boring curvy bottle to be more similar to Victoria’s Secret’s Beauty Rush bottles. We now get a straight cylinder with a metallic cap and a unique design wrapped around the packaging. The bottles feel heavier, feel smoother and generally looks much more professional. Nicely done, Bath and Body Works.

I like the stronger citrus in this than Coconut Lime Verbena. In terms of similarity, the two are alike enough to satisfy people looking for a citrus and coconut combination. But if you were looking for the exact same fragrance, you may have to look up stray bottles of Coconut Lime Verbena, as there is a noticeable difference between these two. And if you were looking for a more subdued interpretation of coconut and lime and have money burning a hole in your wallet then Creed’s Virgin Island Water is still one of the best coconut-based fragrances I’ve smelled so far.