“Don’t worry, they have a scent for that” has become something like a catchphrase for me. There’s a bit of a game my friends play where they go away and think of the strangest things that someone might want to smell like and come to me telling me they want to smell like it. Then I spent some time researching and getting frustrated. I know it’s just a joke and they don’t really mean for me to find and test these things, but it’s the principle of the thing. A lot of the time I have no answer because their requests are akin to, “I want to smell like that awkward feeling you get when you don’t know whether you should help someone or not then by the time you decide that person already solved their problem”. 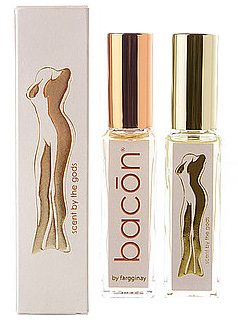 Sometimes, I get easy requests. This is a post about three of those requests.

“I want to smell like bacon.”
I want to know if people say they want to smell like bacon because they read Perfumes: The Guide by Turin and Sanchez. Or if they picked it up elsewhere. Whatever the reason, I get asked what smells like bacon a lot. I get asked so often, that I’ve begun to wonder if my choice for bacon perfume is really the best choice. Fargginay Bacōn, smells just like bacon. Probably a really obvious choice for perfumistas, but for everyone else, finding out that a bacon perfume does exist surprises, pleases and bewilders them.

“I want to smell like a balloon animal at the carnival.”
My friend had thought he was being rather smart with this one. Afterall, who in their right mind would want to smell like rubber and sugar? Too bad I had already experienced this one and he can go out and get himself a bottle of Gucci Rush and bathe in the stuff for that sweet rubbery smell.

“I want to smell like the garage.”
I get a lot of smart comments from men who say perfume isn’t for them unless it smells like motor oil, gasoline, or the garage. Thankfully they don’t have to look very hard. Classic Fahrenheit by Dior smells of gasoline and reminds me quite a bit of being in the garage. Though word has it that the reformulated version is weaksauce.

So there, three things I get told people want to smell like. And three rebuttals. I don’t have a suggestion for everything though, and I’m still stumped every time someone tells me they want to smell like “old socks stuffed in a box and left in the attic”.