The more of the Poison line I discover, the more I puzzle over the fact that the original Poison, released in 1985, has eleven flankers. No matter what fragrance you’re talking about, that’s still a lot of flankers. 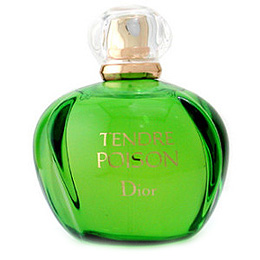 In Bottle: Fresh, sweet and woodsy with a hint of spice and a bit of ambery quality.

Applied: Tendre Poison comes out right away with a big hit of fresh citrus that rolls with a sweet opening that takes you on a trip down to floral and woodsy in no time. There’s a bit of amber quality to this, perhaps a result of the honey warming up the scent as it combats the blast of cool citrus that came out from the opening. The fragrance hits a floral chord in the middle stage with a nice tuberose making a rather grand entrance to my nose. The tuberose gives the rest of the florals–and the scent as a whole–a very nice creamy quality that compliments the woodsiness that settles this fragrance down and takes it into its base notes. Tendre Poison ends with a smooth woody and spicy fragrance.

Extra: Tendre Poison is a rather old showing when it comes to the Poison line of flankers. It came out in 1994 and seems to be a bit difficult to find in the general market these days. At least, I haven’t seen any of it kicking around store shelves. You may have to hit up eBay for this one, but be careful, there’s a sizable counterfeit presence for the Poison line of fragrances.

Design: The shape is generally similar to the original Poison bottle. It’s still a very nice bottle and I still think it’s a lovely use of the apple shape that imparts a certain level of playfulness while maintaining an aura of luxury at the same time. I’m not too wild about how bright green this iteration is, but the general aesthetic is all right.

I rather liked this one. It’s unique in that I haven’t quite smelled something that’s progressed in this way before. It also smells modern, despite its release in the early 90s. But then, it’s earlier release date might help it steer clear of the more recent releases that tend to smell a little generic to me.