With a weather related headache, I had to question whether it was a good idea for me to test another Sexiest Fantasies fragrance from Parfums de Coeur considering the last fragrance I reviewed from them gave me a headache. 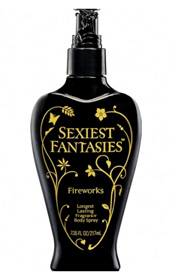 In Bottle: Very sweet, very peachy and fruity with an equal part vanilla and not a whole lot else.

Applied: Super sweet peach and vanilla. The vanilla gets even stronger as the fragrance ages until all you smell is pretty much synthetic vanilla with a fruity background. I’m not getting much else but fruity vanilla out of this which is a bit of a disappointment. In terms of individual notes, they’re all drowned out by the very strong vanilla. The dry down ends up as a plain old synthetic vanilla fragrance.

Extra: Fireworks and a lot of the other scents I have in this line are just body sprays. Fireworks, itself, is very strongly scented so don’t feel that a body spray won’t last as long or be as strong as a full on fragrance. This particular scent can hold its own in terms of longevity and power.

Design: Packaged in a simple black bottle. No frills or thrills here. It’s functional and tries to dress itself up a little, but it’s still essentially a body spray bottle.

Not much to say about this one, it’s fruity and sweet and that’s about the start and end of it. It’s not my kind of thing as it’s too sweet and one-dimensional, but it will smell great to the right person.

Having found myself the recipient of a set of these Parfum de Coeur fragrances, I decided to give these a try. The fact that Parfum de Coeur’s last scent experience didn’t go over well with me doesn’t mean none of their other fragrances won’t. 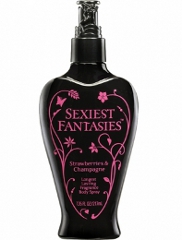 Applied: When I was a kid I had a doll that came with a tiny bottle of perfume. The doll was great, the perfume smelled exactly like this. It was overly sweet, it was some sort of berry and it had florals thrown into it in an attempt to make it smell a little more interesting than just extremely potent strawberry candy. But what the florals just end up doing is give me a headache and make the fragrance smell especially synthetic. There is not much of a progression to this. It starts sweet and strawberry, and it ends sweet and strawberry.

Extra: Apparently there’s a large number of fragrances that also belong to this line of Sexiest Fantasies. I have to admit this Strawberries and Champagne doesn’t remind me of sexy fantasies.

Design: Rather uninspiring design that reminds me a bit of the 90s in a retro nostalgia way. This isn’t a full on perfume–it is just a body spray so I don’t expect too much of its design. The design is functional. It works. It just looks very dated and a bit cheesy.

I had actually been looking forward to seeing if I would get their Skin Musk fragrance in my grab bag as it seemed to be pretty well received, but it was not to be.

Reviewed in This Post: Strawberries and Champagne,  2010, Body Spray.

P.S. And with this rather underwhelming fragrance, I hope you all have a great New Year! 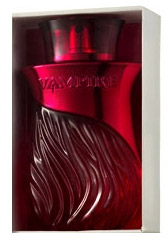