Considering the complete lack of flowers in Viktor & Rolf’s very popular, Flowerbomb, I had to try out Spicebomb to see if it lived up to its name. 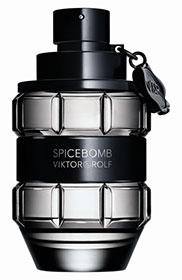 In Bottle: In short, no, this isn’t a spice bomb. It’s rather pleasant though, sweet and warm with a hint of spiciness.

Applied: Initial spray of bergamot that settles into a sweet cinnamon candy scent that makes me think Spicebomb is taking the same “bomb” approach as Flowerbomb. Which also leads me to think Viktor & Rolf’s idea of a bang is something sugary. The fragrance ages into a more mature spice as I keep wearing it, but it never shakes the sweetness that it gathers in the top notes. The scent takes on a stronger cinnamon and peppery scent as it flows into its end stage with a wilting smoky tobacco scent and a bit of synthetic-smelling leather. Over all, I’m not all that impressed, but the longevity was fairly good, giving me a decent ten hours of wear.

Extra: If you were wondering what the elemi note listed below is, it is a resin from a tree. I didn’t get much resin from this.

Design: The shape is somewhat reminiscent of Flowerbomb, given more angles and straight edges to appeal to a more masculine audience, I guess. I don’t really like it and think this particular depiction is a bit lame. Sorry, Viktor & Rolf.

Spicebomb failed to impress me in numerous ways. The fact that it started out sweet and reminded me of a more gourmand Flowerbomb didn’t really help matters either. 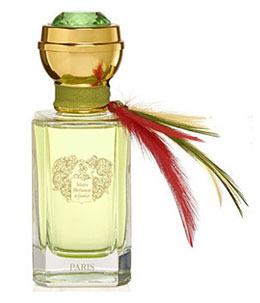 Sonoma Scent Studio is one of those awesome independent houses with an excellent selection of fragrances that are magnificently well-blended. I’m a big fan of independent perfume houses, and am happy to see them doing things their own way. The mass market and even the niche market can sometimes be restrictive. So independent is the way to go.

In Bottle: Incense Pure is like a sniff of incense heaven. It’s heady, it’s sophisticated, it’s sensual and deep. The first smell out of the bottle or vial is like an invitation you can’t refuse.

Applied: Incense Pure starts off with an airy but very detectable blend of–well, incense. The myrrh really gets me. Makes me grin from ear to ear even. Incense Pure isn’t like most incense fragrances I’ve tried. This one is tempered, easier to wear, still absolutely lovely with that oh so distinctive incense fragrance but it’s tempered a bit by a woodsiness that digs itself up and bunkers down. There’s a lovely sense of sensuality about this fragrance too and a hint of ambery musk infused with a gorgeous vanilla. This isn’t your sweet, synthetic vanilla either. The incense seems to do wonderful things to vanilla, bringing out its spicy personality instead of relying on vanilla’s surface sweetness. There’s even, to my delight, oak moss in this! And the oak moss does wonders to give the fragrance a beautiful mossy green undertone. As if the incense wasn’t enough, it gets me twice with the oak moss too.

Extra: Sonoma Scent Studio offers Incense Pure in a variety of sizes and for some very reasonable prices considering the quality of the ingredients. You can read up about Incense Pure on their website.

Design: I have a sample of this fragrance, but the bottling looks quite nice. The shape of the bottle is clean and neat. A tall squarish bottle with a gold cap. Keeping it simple is always a plus in my books.