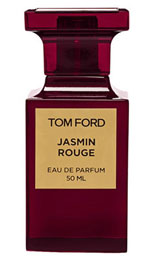 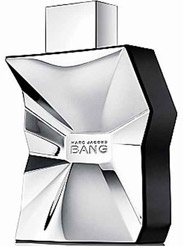 In Bottle: Bang slaps me in the nose right away with a gigantic dose of peppers. Red, white, pink, black. You got the entire pepper rainbow in this thing. And hey, it’s off-putting but I actually like it.

Applied: Pepper, pepper, pepper. Like grinding peppercorns and spraying them into my nose. The initial reaction I had was to sneeze but it didn’t get to that point. I love pepper. I love how strong and blatant the initial pepper blast in this stuff is. If you want something to wake you up, Bang’s opening is it. But after the pepper blast, Bang heads into something a little more conventional as it veers into a leathery woods scent with a tickle of vetiver and a now very familiar cedar note. But all that is second fiddle to the pepper that just doesn’t go away. Thankfully Bang is light-handed with its used of cedar and has ended up with a competent woodsy mid-stage instead of a cedar mess that so many other cedar-based fragrances suffer from on my skin. The dry down is a decent play between bitter green notes, a lingering tickle of pepper, and a pleasant bit of earthy patchouli and woods.

Extra: The less said about the advertising campaign for Bang, the better. I thought they could have taken this in a few different directions but ultimately picked the obvious, which was disappointing to me. Well, if nothing else, the ad caught a lot of people’s attention.

Design: Bang’s bottle is not for me. It’s a little silly looking, if you ask me, and seems overly gimmicky. The bottle boasts a metallic exterior that looks like it would have once been a statement piece in the world of metal rectangles before someone punched it out of shape in a blind rage. Surprisingly enough, despite its non-traditional appearance and respectable weightiness, the bottle is fairly easy and comfortable to hold.

I’m not a fan of the reputation they built around this fragrance. I’m much less a fan of the silly-looking bottle. But the fragrance is a competent well-blended spicy woods gig.

The Saga of the Inoffensive Men’s fragrance continues with Gucci pour Homme, a mixture of fresh and woodsy for the man who isn’t yet tired of smelling like a mixture of woods and spice. 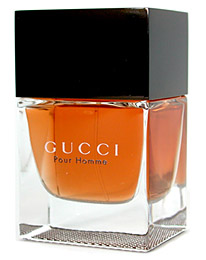 In Bottle: I can harsh on Gucci pour Homme for smelling like every other woody spicy fragrance for men out there but it really is a winning combination that, if worn properly, is like a formula for success. Well, fragrance success anyway. Its in bottle presence is a sharply fresh spicy woodsy scent.

Applied: Spicy woods! The pepper in this lends a pleasant kick to the blend of woodsiness that predominates this fragrance. There isn’t a whole lot of originality to be had here. If you liked Dolce and Gabanna’s Light Blue pour Homme, you will find this a fairly good choice too. It differs, of course, with Gucci pour Homme having a cleaner and more detectable aromatic bay leaf note in it and a strong cedar and woody accord. The bay leaf sticks around in the mid-stage where it mingles with the woods and does a fine job making Gucci pour Homme smell decidedly masculine. Of course a woman could wear this too, but the marketing would have a fit as this was clearly made for a man to wear. It smells of clean dry wood and greenness. Like a man who spent the last three hours chopping down trees and making a very nice desk in the forest then took a shower. The dry down is likable enough with your typical woodsy cleaned up vetiver fade with a pretty nice leather note and a splash of warm amber thrown in for good measure.

Gucci pour Homme  is a very popular fragrance for men. You can probably tell why. Like with all men’s fragrances that lack in the originality sector, it is high in versatility and likability. You can wear this in the office, to the club, on the bus, to the golf game. Wherever it is your heart takes you guys and girls. Just a forewarning that Gucci pour Homme runs on the strong side, so ease up on your trigger finger.