So I went and smelled a Paris Hilton perfume today and aside from the looks at the drugstore some people were giving  me, it went all right. A lot of people swear by Paris’ perfumes, if they can’t swear by her personality so I was curious. 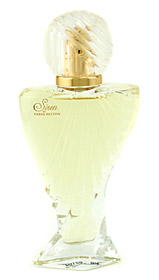 In Bottle: Smells fruity in the bottle with a hint of citrus as is per usual for a celebrity perfume. It smells a little bit like a slicked back coconut resting on a bed of fruit salad ringed with flowers. Pleasant but uninspired.

Applied: Fruity flare-up immediately followed by sweet florals where the frangipani makes itself most known. Siren’s a surprisingly pleasant and more successful beachy, tropical fragrance than Dare Me by Baby Phat but I’m still not sure I’m entirely on board with this situation because while it smells pleasant enough, it smells pretty generic and rather dull. As the fragrance ages, its mid-stage is a decked out sweet floral with a predominant splash of vanilla that reminds me quite vividly of Viva la Juicy by Juicy Couture. The florals get a bit weaker as the fragrance wears on though and you’re ultimately left with the hallmark of the modern perfume’s drydown; soft sandalwood and vanilla.

Extra: Paris Hilton has lent her name to the fragrance game for a number of years now and her perfume are quite popular. Maybe, and I hazard to say this, as popular as Britney Spears fragrances. The ad campaign for Siren had a golden mermaid Paris shopped onto a rock with crashing waves. It was a little ridiculous.

Design: Siren’s bottle reminds me a little bit of Guerlain’s Champs Elysees. It’s just in the shape really. It’s got a weird, twisted art deco type thing going on as well that I’m not 100% on board with but the bottling is not bad. You can tell they were going for the whole mermaid tail motif with the myth of the sirens and whatnot. It accomplishes what it needs to accomplish if the imagery is a little bit heavy-handed.

I know a lot of people are put off by celebrity perfume but there’s no shame in owning or liking celebuscents. It’s a bit of a funny misconception that people think Paris actually comes up with her own perfumes. Rest assured, she did not don gloves and goggles and spend years or months mixing fragrances together into a coherent mix. I’m pretty sure perfumer, Honorine Blanc had something of a hand in formulating this stuff.