The following is a list of popular recommendations for young women interested in popular perfumes and wondering what everyone else is smelling like. In no particular order: 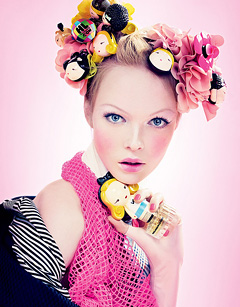 Notice any trends? First of all, fruity florals are quite well represented in the above list. So is sweetness and candy, and benign fresh and citrus scents. Which explains practically 80% of the things the perfume industry has put out in recent years.

Know something that should be on this list? Please leave a comment. I’m positive I’ve missed something!

Youth Dew by Estée Lauder was released in 1953 as a bath fragrance and for years, it was the fragrance that women reached for much like Light Blue by Dolce & Gabanna is reached for today. Youth Dew’s popularity might be waning with the ages, but it remains a relevant piece of fragrance history.

Applied: Initial blast of citrus and aldehydes receding into a spicy, mature floral scent that echoes that darkness in the juice. Like with most aldehyde-based scents for me, they never really go away and end up lingering throughout the fragrance. The florals hover around the animalic and dirty. A lot of modern fragrance wearers find this offensive because perfumistas refer to this “animalic and dirty” note as “indolic”. Indole being found in either jasmine or clove and in Youth Dew’s case, probably the clove. Maybe even both! The gloves are off on this one. The spice and florals do little to temper the indole in Youth Dew but if you let it stay on long enough and focus, a strange thing happens–it becomes easier to understand. Youth Dew isn’t “smelly grandma”, it’s a complex, daring fragrance that you aren’t going to get with your Light Blues or your Circus Fantasies. If you really wanted sexy, this is probably the stuff. It smells like what it is and you can accept it or get out as far as Youth Dew is concerned. Anyway, after the mid-stage that indole note hangs around for a bit into the dry down that, to me, smells mostly of patchouli trying desperately to clean up the mid-act.

Extra: Youth Dew is a strong fragrance. It comes on strong and leaves a strong impression and it’s gotten something of a bad rap over the years. People call it, “granny juice”, “hell juice”, “smells like corpse” and a multitude of other things. But Youth Dew is a piece of history, whether these people like it or not. But please, Youth Dew lovers, go easy on the trigger.

Design: Youth Dew is bottled in a ribbed glass affair with a bow tying it in the middle where the bottle gets a little thinner. It’s topped with a golden metal cap that has some detailing near the top. I can see its concept borrows from the figure of a woman and appreciate its subtle homage more than Gaultier’s bottles which are often more literal. In general, a simple design but an effective and memorable one.

I’ll come clean, I don’t like the smell of Youth Dew. But I don’t hate it either. It’s not a fragrance I can really see myself wearing because I can’t get past the indole in this stuff but it is a classic through and through and if nothing else, you gotta give credit to this classic.

Boss Femme is like the amalgamation of fresh floral women’s scents. It’s like Love Etc. in that it pretty much smells like a category of scents without too much to discern it from the rest. But in a way, that could also be where its success lies. 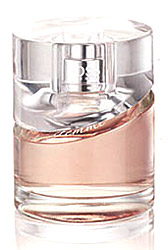 In Bottle: Floral with a hint of fruit. I’m smelling a bit of rose but there’s a stronger jasmine note in this that’s vying for attention. This smells flowery, clean and feminine. Very generic but entirely enjoyable.

Applied: Goes on with a light citrus and slightly tart opening as it spreads into the mid-stage with that pleasant, breezy rose and jasmine combination. There’s a faint hint of sweetness in this too to make it more feminine  than it already is. I like this, it’s nice. It’s not great. It’s not groundbreaking. It’s just plain old nice. As Boss Femme heads into the dry down, you get a little bit of smoothness wandering in as it mixes with the lemon and for a brief moment, I thought I smelled plastic but the dry down is a predominantly sharp lemon, layered with a bit of smoothness and soft wood. Boss Femme is just good, clean, nice, and no nonsense. Kind of like soap–except better.

Extra: I think I’ve said it before, that Hugo Boss seems to be really good at keeping their fragrances on the lowdown and less offensive side of things. And it works out okay for them. It’d be quite the day when this house puts out something so awesome it eclipses the sun. But for now we have nice things like Boss Femme and Deep Red.

Design: Boss femme is an interesting little glass bottle that’s slanted at the top part with a cap that slants down to cover that portion up. It’s an interesting little design decision that makes my need for everything to be straight twitch just a little bit. The name of the fragrance is written in cursive font on the glass. The bottle I used had “femme” running along the dip of the curve and the house name etched into the metal sprayer. The bottle is easy to hold though, has a good weightiness to it and the color of the juice is just adorable.

There was a woman who worked briefly for a doctor I used to go to who wore this scent. I remember her rather well–not so much for her perfume–but for how the smallest things could make her laugh.