How do you round out a week of reviews for one of the world’s most famous and respected fragrance houses? Easy.  Chocolovers. 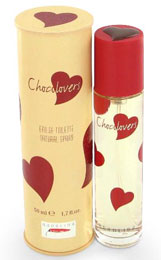 In Bottle: Very sweet, rather cloying, chocolatey, milky, nutty fragrance with a splash of orange and lemon juice. I didn’t expect anything different from this and it really delivered.

Applied: The orange and lemon curdle the fragrance on initial application and I wholly believe Chocolovers would have been better off without it. Once the lemon recedes you’re left with–well, what else? A smooth, creamy chocolate milk with hazlenut dashed in there for a little added complexity. Chocolovers smells like a candybar. A gooey, rich, wafer-stuffed candy bar that probably has a thousand calories in it, is probably bad for you. Once you’ve eaten it, you aren’t left feeling satisfied but you do feel a little guilty. That’s my experience with Chocolovers. Big strong smell upfront, fleeting feeling of guilt in the back. The chocolate note in this smells as expected, it’s a synthetic and it’s a clearly detectable one which would harm the fragrance’s enjoyability but come on–the thing is called Chocolovers, how serious can it possibly be? It smells all right for what it is; a fun, cute, throw it on during an off-day fragrance. Just be warned, it is powerful. Chocolovers will fade in a few hours to a milky, dusty fragrance that seems to float up out of nowhere.

Extra: I’m not a fan of the Chocolovers fragrance and feel Aquolina got their Pink Sugar fragrance just right with how fun and simple and unapologetic it was. But the Blue Sugar flanker and now this one? They aren’t very original or unique from one another. They are all gourmands of some relative state and they all echo the Pink Sugar base.

Design: Chocolovers’ design is an interesting thing to love. I can’t get past how just how little it cares about being serious. Pink Sugar had a cute little motif. Blue Sugar was subdued and rather boring. Chocolovers just takes literal interpretation to the extreme with its bottle. Little wavy hearts on the glass. A chocolate heart on top of the cap. A red sprayer nozzle. There’s not a single serious thing you can say about this fragrance.

It’s great when the first thing I thought when I saw the notes list was, “Really? Coriander?” The second thing was to look up on Google how many flanker products Chocolovers has and it turns out the fragrance has been made into  body butter. Now that I can see.