Having missed out on numerous past Shalimar flankers, I resolved to go smell this one. At the very least, I could finally add a Shalimar flanker to my list. I wasn’t really sure what Parfum Initial is supposed to do to beloved Shalimar but it wasn’t what I expected. 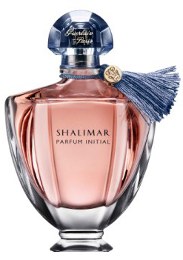 In Bottle: Fresh and sweet citrus with a deep vanilla note lingering about in the back.

Applied: Fresh and clean citrus on opening with the rose and other florals rolling in soon after. There’s a dry woodsiness that joins the fragrance shortly after that as the scent warms up with a vanillic quality that doesn’t reach gourmand–and I’m glad. This is already different enough from original Shalimar that I’m a little disturbed when the mid-stage continues as we get a deep, warm vanilla, touched with a hint of florals. The fragrance ages into this warm, tonka quality that’s dense and deep but never reaches the point of gourmand because there’s that clean, fresh note keeping it from going full-on foody. There’s a lot missing in this fragrance that I would need if I were to call it anything related to Shalimar. Shalimar to me was that leathery vanilla scent. There’s vanilla in Parfum Initial but the missing leather makes this scent feel like it’s missing something. Maybe that’s just me though. What Shalimar Parfum Initial does is take an old classic, put a very modern spin on it and make it more accessible to a wider audience. I don’t know if I like this flanker, but it is nicely done regardless.

Extra: Shalimar Parfum Initial was released in 2011 and was composed by Thierry Wasser.

Design: I haven’t yet held the bottle for Shalimar Parfum Initial but if it’s anything close to the new Shalimar bottles then I can pretty much be guaranteed that it’ll be awesome. I love the redesign of the Shalimar bottles, it brings the fragrance back to the classic design that most people know Shalimar to.

The more I think about this fragrance, the less sold on it I am. I’ll always think Shalimar got it right almost a century ago. While is a nice, newer, more approachable interpretation I also think it lost a little bit of essential history along the way.