What classy digs I’ve found myself in today with one of the (surprisingly) many Playboy fragrances. It’s Play It Sexy, a fragrance for women that I guess women can use to seduce men. I’m not sure this will work the way it claims it’ll work but let’s give it a sniff and go from there. 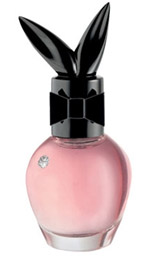 In Bottle: Sweet citrus that doesn’t hit the right notes and ends up smelling a little synthetic right off the bat. I kind of get some of the licorice note up front too which doesn’t help the synthetic smell of this at all.

Applied: Citrus on opening with a sweetness to it that’s a little bothersome. That synthetic feel of the fragrance isn’t any better on the skin. The fragrance is rather quick to evolve as well as the citrus moshes itself into the florals where I get jasmine and what’s clearly a rose note. The sweetness mingling with the rose is a tad disturbing and is reminding me a bit of how Danielle by Danielle Steel smelled and I did not like that one bit. The licorice note–hilariously enough–is also present throughout this entire fragrance taking this to the next level of unappealing because it’s mingling with everything and in a really poor way. It’s kind of like you’re not really enjoying a discordant juice blend that you decided to make yourself one day and tried to add some random element to it in the hopes of improving upon your wayward culinary attempts. Only said random element only made things worse. The fragrance dries down into a pretty generic vanilla sandalwood which I actually liked seeing as the rest of the fragrance didn’t hit it off with me. I will give Play It Sexy one thing, it doesn’t reach cloying sweetness and it isn’t crazy strong. So while I didn’t like the fragrance, I didn’t feel like I had to run to the bathroom and scrub it off.

Extra: So I don’t think Playboy will be joining the hallowed halls of mainstream designer perfumes any time soon. But if you’re looking for some cheap thrills in perfumery, these Playboy scents are very affordable. They’ll run you a few bucks over an Axe bodyspray but they do smell better.

Design: I really can’t speak for the bottle design for this stuff. It’s like an amalgamation of things I don’t like. Weird animal motif, random gem, pink, bowtie. It’s cute, I suppose. The only thing it’s missing is Comic Sans font and a fairy. The aesthetic just isn’t sitting well with me.

So these fragrances come in a three pack, which is a pretty good deal, but supposedly they are supposed to represent the stages of a woman’s seduction game. The other two fragrances I’ve got are called “Play It Spicy” and “Play It Lovely”.