Tauer Perfumes caught my eye while I was shopping for samples and thought of my husband’s birthday. Now his birthday is a few months off at least, but when it comes to me and fragrance shopping I can’t get started soon enough. What attracted me to Auburn was the promise of a cinnamon and tobacco scent. 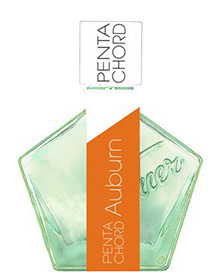 In Bottle: A hint of sweetness mixed with a bit of cinnamon and smokiness. Reminds me a bit of autumn.

Applied: A hit of sweet cinnamon up front. I get no orange flower from this and the sweetness of the fragrance instantly disqualifies it for my husband. But I let it sit and see where it goes. Auburn rather happily introduces a sandalwood and tobacco mix, more heavy on the tobacco than sandalwood though. There’s a pleasant smokiness to this that dominates the fragrance giving it a very rich incense-like quality. What I don’t care too much for is the sweetness that I’m not sure I quite like mixed with tobacco. Auburn is definitely warm and sweet and gives me an idea of what a cinnamon smoke would smell like. But I can’t say I’m a big fan of the mixture. It’s definitely interesting, but I don’t know about wearable when it comes to my taste.

Extra: The Pentachord series is about the molecules in the fragrances where every fragrance features just five notes.

Design: I’ve always liked Tauer’s bottles. Pleasantly geometric, functional with just enough style and none of the fluff. Good spraying, good feel in the hands, looks great on display and if you have more than one, they look fabulous together.

I do find the concept of the Pentachords interesting and while I don’t think Auburn really suits me, I’d definitely like to keep exploring the rest of the series.